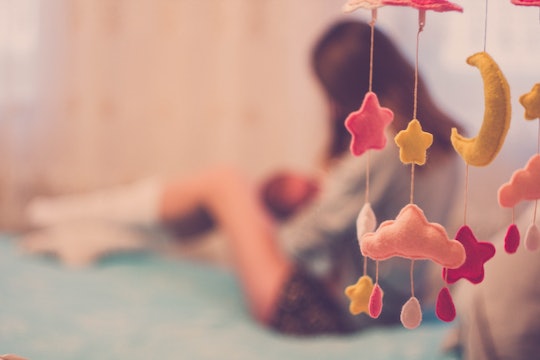 Raising kids is stressful and expensive. We all know that. And although new parents are often sticker-shocked at the price of raising a baby, the costs actually rise as children age. While the impact on a family's bank account is easy to track, what about other effects? Does the cost of raising children change parents' mental health? It would stand to reason that higher costs as kids get older lead to more stress, but it's an often-overlooked problem.

Many parents are caught off-guard by the little things that add up over time. They may plan on saving for college, but forget to factor in swimming lessons, for example, or bigger hotel rooms on vacations. According to MacLean's, low-income parents spent 14 percent of their income on raising kids in 2007. Translation: it's always more than you think. And today's parents are struggling financially even more than previous generations, one study found, that, while the median household income has stayed the same since the 1970s (even though more women are working), housing and child care costs have risen sharply. According to NPR, 31 percent of parents who pay for child care say that the cost has caused a financial problem, and of those, 71 percent characterize the problem as either "somewhat serious" or "very serious."

Nearly everyone (yes, even the very rich) worries about money. But the American Psychological Association's annual "Stress in America" report found that parents suffer more financial stress than those without kids. Parents report higher levels of stress about money (rating their stress 5.8 on a 10-point scale, compared to the 4.4 rating of those without kids), and 77 percent said money is a "somewhat" or "very significant" source of stress, compared to just 64 percent of non-parents. And those higher stress levels have consequences: parents who rated their money stress as "extreme" were more likely to report using "unhealthy behaviors" to cope, such as drinking, smoking, or watching too much TV, and nearly three times as likely as less-stressed parents to rate their health as "fair" or "poor." The majority of parents — 82 percent — reported experiencing stress symptoms like irritability or anxiety, and 36 percent said that stress has a "strong" or "very strong" impact on their mental health.

But does that stress level stay the same, from infancy on? It turns out that parents' emotional health fluctuates as their children age, according to a Bowling Green State University study. Parents of kids under 5 report less depression than those with school-age, adolescent, or early young adult children. Increased depression and decreased satisfaction among parents of older kids could be attributed to spending less time with them once they're in school, but there's a catch: parents of school-age and adolescent kids are also more depressed than parents of early young adults who have moved out. And while parental well-being increases overall once children enter young adulthood, parents whose young adult children live with them and/or depend on them financially report less satisfaction and lower self-esteem. Meanwhile, when comparing childless adults aged 50-84 years old to those who have (non-dependent) adult kids, there's no significant difference in depression rates. Apparently it's not the kids that drive you crazy — it's just paying for them.