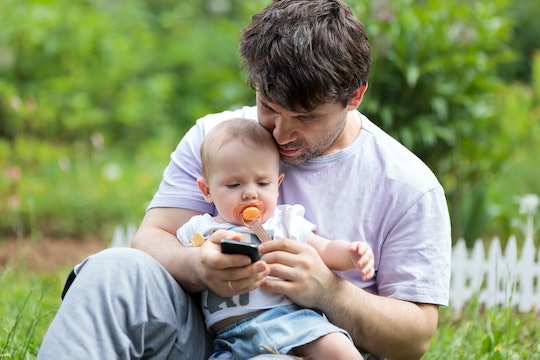 How Playing With Cell Phones Affects Your Kid Later In Life

Sure, it might seem cute when your baby is swiping right on your mobile device. But you may also wonder how playing with cell phones affects your kid later in life. Unfortunately, the jury is out on potential longterm hazards. The widespread use of technology in the home is growing too quickly for doctors and researchers to study conclusively how it affects kids longterm.

Two different studies, one conducted by the Boston University School of Medicine and published in Pediatrics, and the other published by The Journal of the American Medical Association, (JAMA) have found that there's still a lot science doesn't know about the affects of mobile devices on kids. Dr. Ann Louise Gittleman, author of Zapped: Why Your Cell Phone Shouldn’t Be Your Alarm Clock and 1,268 Ways to Outsmart the Hazards of Electromagnetic Pollution reiterated these findings to Parenting, saying that there's not enough definitive data on how cellphones can affect a kid's brain chemistry later in life.

Here's what science has determined about the frequency with which babies, toddlers, and kids are using mobile devices. The Washington Post reported that nearly 40 percent of children between the ages of two and four — in other words, toddlers — play with mobile devices. A 2012 Nielsen study indicated that most people who own tablets give them to their kids to play with. And, according to the aforementioned article in Parenting, 31 million kids are on their cell phones on average 3.75 hours a day.

Because technology is being used by parents, and their progeny in new ways, it's important for science to explore any potential longterm hazards. So, what are they?

Gittleman told Parenting that you should think of a cellphone as a low-powered microwave that you hold close to your brain. She continued that "brain metabolism changes, activation of heat shock proteins, and DNA damage" are all possibilities of things that can happen from the waves emitted from a cellphone. She also cited a Swedish study by oncologist Dr. Lennart Hardell that indicated children and teenagers are five times more likely to get a particular kind of brain cancer known as glioma if they use mobile phones before age 20. Hardell's research showed that risks increased depending on how many hours your kid spends with a mobile device in hand, and from what age he or she starts using cellphones.

Piggybacking on the inconclusive JAMA study, there just isn't enough data to provide more insight on the nitty gritty details of longterm affects in the United States. Because pediatric guidelines have not been set around the safety of cellphones in kids under two years, Pediatrics recommended parents use a "common sense" approach.

Finally, research confirmed that it's tempting to use smartphone apps to teach toddlers scholastic skills. Pediatrics reported the "drilling of facts" in most mobile apps is a good way to get your kid to learn, but by no means can replace the sensory learning that happens when a toddler investigates the real world and relying on apps can hamper a child's social skills later in life.

Of course try telling all this to Grandma who wants to FaceTime with your little one.