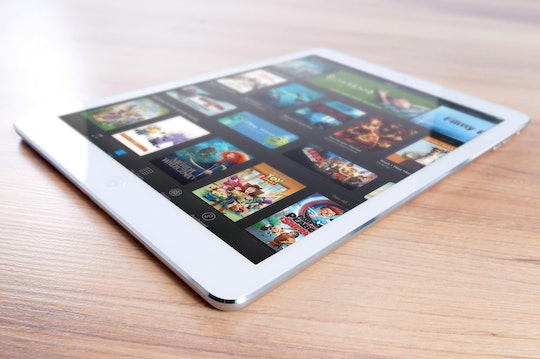 How Playing With iPads Affects Your Kid Later In Life

Screen time for kids is one of those topics that's sure to rile up get any group of parents. There are those who wouldn't dream of letting their little one touch an electronic device until they're older, and there are those who love seeing their whiz kid scroll through apps and navigate touch screens. If you're wondering how playing with iPads affects your kids later in life, however, you won't necessarily find one definitive answer to settle the debate.

In October 2016, the American Academy of Pediatrics (AAP) actually updated its recommendations about screen time for babies and children. According to CNN, the AAP's previous guidelines were to limit screen time to no more than two hours a day for kids over 2. The new AAP guidelines, however, are much more nuanced — they include limiting screen time to video-chatting for babies under 18 months, watching any TV or screen time with toddlers between 18 and 24 months old to help them understand it, and capping screen time at an hour a day for kids between 2 and 5 years old. For kids older than that, the AAP noted that parents should be consistent about how much screen time is allowed, and make sure it's balanced with physical activities and a healthy lifestyle.

It's certainly a lot to take in, but having a good grasp of the guidelines could make your child more likely to absorb the benefits of screen time without suffering the drawbacks.

Here are some ways that using an iPad could affect your child, both positively and negatively.

More Like This
The 16 Best Subscription Boxes For Every Kind Of Kid
20 Stocking Stuffers For Kids Under $20
Festive Mommy & Me Holiday Nail Ideas To Try
101 Advent Calendar Activities, From Books To Read To Cookies To Bake