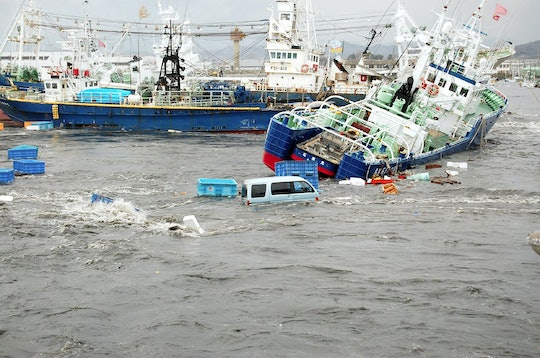 How Powerful Is A Tsunami Wave? Fukushima Is On High Alert, Once Again

After a 6.9 magnitude earthquake hit Fukushima on Tuesday, a tsunami alert was placed on the region. But how powerful is a tsunami wave exactly and what kind of damage can it do? Fukushima is home to the nuclear plant that was damaged in a 2011 quake, so the area has had its fair share of tragedy and disaster. Geologists originally measured the quake as a 7.3 but it has since been downgraded. Hopefully that bodes well for any ocean surges.

Already waves of 2 feet and 3 feet, respectively, hit Iwaki City in Fukushima in the wake of the quake and more are likely on their way. The Japanese public broadcaster NHK told residents to get out immediately. "Please evacuate right now. Don't stop. Don't try to go back," the agency said, according to NBC News.

The agency issued a warning for a possible 10-foot-high tsunami wave, which is about the highest that tsunami waves usually go, although there have been surges in the past that reach about 100 feet. Given the magnitude of the earthquake, this wave could be very powerful. Tsunami waves, according to National Geographic, usually occur after earthquakes and tremors and they can move as "fast as a commercial jet." The defining characteristic is that the top of wave moves way ahead of the bottom and that causes the water level to rise overall.

They can be very, very scary. Many bystanders say that a tsunami wave sounds like a freight train and they have the capability to pull anything in its way — cars, people, even just the beach itself — into it. The most powerful tsunami in recent history was the 2004 wave in the Indian Ocean where over 150,000 people were dragged out to sea on the coasts of Thailand and Indonesia. That was after a 9.1 magnitude earthquake shook the region, which is not so far off from Tuesday's earthquake in Japan.

Tsunami waves also come in, well, waves, and the first ones may not be the most dangerous. Eyewitnesses to the Indian Ocean tsunami and the one in Chile in 2010 report that the ocean sort of rises immediately and takes over. A tsunami wave also goes out as quickly as it comes in — there's not a lot of time to react, which is why Japanese officials are urging people to get out of the area before it's too late.

According to Reuters, all nuclear plants in the area have been shut down and there is no reported damage. There are cooling systems on to keep fuel cool, which is how the meltdown occurred in 2011. Hopefully the tsunami warnings will pass soon so the people of Japan can begin assessing earthquake damage and take steps forward.