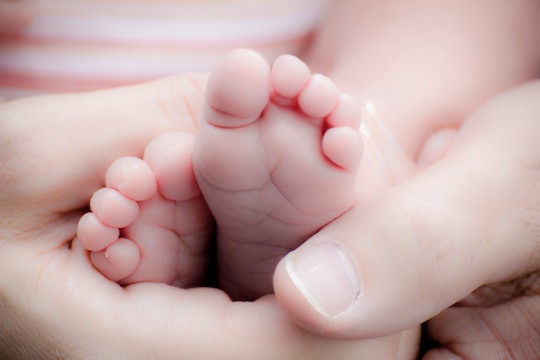 How Premature Babies' Brains Are Shaped By Touch

When my husband and I welcomed twins prematurely at only 25 weeks gestation in 2012, we were so scared about what their early arrival would mean for their development. Preemies are at risk of a number of dangerous complications, and the earlier they arrive, the greater those risks become. But we were quickly told that perhaps the most important thing we could do to help them was to hold them. Although that might sound like abstract advice about the healing power of love, science has shown that supportive, skin-to-skin touch actually has a measurable effect on their brain development — and now researchers have begun homing in on exactly how premature babies' brains are shaped by gentle touch. According to a study in the March issue of Current Biology, it appears that gentle, supportive touch helps premature babies' sensory perception develop in a way that is more similar to that of babies who were born full-term.

As part of the study, researchers at the Nationwide Children's Hospital and Vanderbilt University Medical Center measured the brain responses at hospital discharge of 125 babies — some of whom were born between 24 to 36 weeks gestation and spent time in the NICU, and some who were born full-term between 38 to 42 weeks. What they found was that, without the extra time in the womb (coupled with the increased likelihood of exposure to painful procedures) the preemies were more likely to demonstrate a reduced response on an EEG to gentle touch. But most importantly, preemies who spent more time being held by their parents or by healthcare providers actually had a stronger brain response than those who didn't, suggesting that loving touch can help offset some of the inevitable impact of prematurity on brain development.

In addition to simply being a remarkable finding, the research is also extremely important from a medical care perspective. The study found, for example, that while preemies are given pain medication or sucrose to help during medical procedures, in a long-term sense, it doesn't actually help prevent the loss of brain response to touch that occurs as the babies develop in an environment so profoundly different than what they would have otherwise experienced in utero. And given that so many babies have to spend prolonged periods of time in NICUs, sometimes without their parents, study author Nathalie Maitre said that the results show the importance of ensuring that touch is part of hospitals' overall approach to preemie care. Maitre said,

Making sure that preterm babies receive positive, supportive touch such as skin-to-skin care by parents is essential to help their brains respond to gentle touch in ways similar to those of babies who experienced an entire pregnancy inside their mother's womb. When parents cannot do this, hospitals may want to consider occupational and physical therapists to provide a carefully planned touch experience, sometimes missing from a hospital setting.

The growing body of research involving the importance of touch on brain development is something that has helped broaden the medical view of best care practices for preemies in NICUs around the country in recent years, as well as throughout the world. According to CBS News, many hospitals now offer "cuddler programs" where trained volunteers offer simply to hold babies in the NICU to help with their recovery. And since very small or sick babies may not always be able to be held, NICU staff at the Poole Hospital in the U.K. have started giving preemies crocheted octopi with soft tentacles that experts say "remind babies of the umbilical cord and their mother's womb," according to CNN. Research into the benefits of the octopi — an idea which originated in a Denmark hospital in 2013 — suggests that the addition of the soft toy can help babies' breathing, heart rates, and oxygen levels, and parents have reported that their babies seem calmer in general.

Perhaps the most encouraging part of the research into touch therapy for preemies though is the way it can have a lasting effect. A December 2016 follow-up study published in Pediatrics that looked at the long-term implications of skin-to-skin touch (aka, kangaroo care) found that young adults who received kangaroo care as premature babies were generally less aggressive, less impulsive, and less hyperactive than those who did not. And they also had different brains: neuroimaging found that those who had received kangaroo care as babies had more volume in the left caudate nucleus of their brains, which, according to The Huffington Post, is a part of the brain associated with learning and memory.

Of course, few parents need research studies to convince them that holding their babies is good for them, and even without the science backing it up, it seems only to make sense that love and gentle touch would help medically-fragile babies grow and thrive. But for preemie parents, who want to do whatever they can to make sure their little ones have the best start in life, hearing that touch can make such a difference is definitely helpful.

More Like This
Is It Good For Babies To Be Exposed To Germs? It’s Complicated
New Study Finds Brains Of Teens Who Lived Through The Pandemic Aged Faster
Can You Give A Sleeping Baby A Breathing Treatment? Experts Explain
We Have To Talk About This Fish That Will Pat Your Baby's Butt Until They Fall Asleep