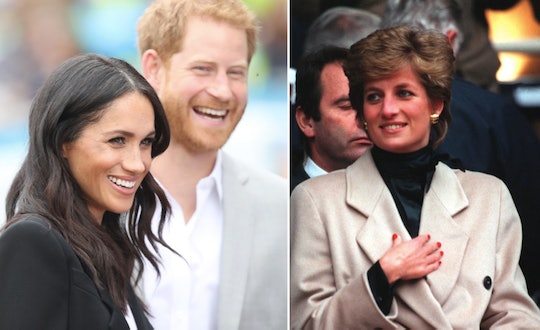 On Monday, the world celebrated as the Duke and Duchess of Sussex announced the delivery of a healthy baby boy, who is now seventh in line to the throne of England. Though a new birth in the family is all-around an exciting time, the joy can be sullied just a bit when there's an important member of the family missing. This is the special way the late Princess Diana was included in Prince Harry and Meghan Markle's royal baby announcement, because she was absolutely not forgotten.

When you welcome your first child into the world, it's only natural to want to celebrate with your parents, who are meeting their grandkids as well. However, when you have a parent who's passed away — Princess Diana tragically died in a car accident in 1997 — the moment can feel somewhat bittersweet. And in the text of the official delivery announcement, Prince Harry and Markle made an ode to Diana, noting that her siblings were informed of the birth at the same time the Queen and Markle's immediate family was. Though Diana herself couldn't be here to share in the news, at least her family could celebrate for her.

The post went on to say that the Duchess' mother, Doria Ragland, is "overjoyed" by the arrival of her first grandchild, and is "with Their Royal Highnesses at Frogmore Cottage. Her Royal Highness and the baby are both doing well."

It's safe to say that if Diana were alive, she would likely be spending as much time with the new family, too.

It's not the first time Prince Harry and Markle made an effort to keep Diana's side of the family well involved in their lives. In fact, HuffPost reported that they invited members such as Lady Jane to their May 2018 royal wedding, as a sort of representation for Princess Diana. "Prince Harry and Ms. Markle both feel honored that Lady Jane will be representing her family and helping to celebrate the memory of the late Princess on the wedding day," a palace statement read, as Entertainment Tonight reported in March 2018.

Another potential nod to the late royal? The Washington Post reported that some are betting the name "Spencer" will be included somewhere in the new baby's title. Spencer is Diana's maiden name, and she went by Lady Diana Spencer after she was separated from Prince Charles.

Though the excitement to learn more about the new baby is mounting (What does he look like? When will the first photos be released? What will his name be?) Prince Harry has already made it clear that we'll have to wait on the latter information for just a while longer.

In a video posted to the Sussex Royal Instagram account, Prince Harry addressed the press saying that Markle and he welcomed their first child on Monday morning, and that he is overjoyed and in "awe" of women and the whole process. As for baby names, they are "still thinking," he said, which makes sense, given that it is a pretty big decision.

As for whether or not the name will include another tribute to his late mother is yet to be seen. However, it's so sweet to know that the couple has made every effort to keep her and her family as close to their own as possible.