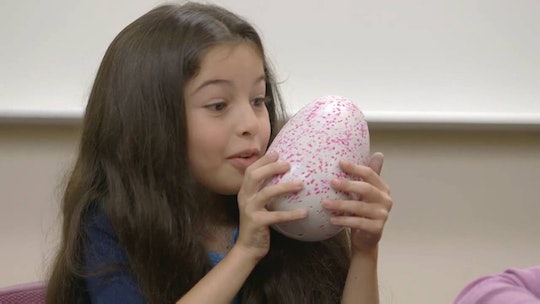 Hatchimals Will Be Restocked In Stores Soon

Well, now that the holiday season has passed and people have flaunted their gifts all over social media, your child may be feeling left out if they didn't get this season's hottest toy: a Hatchimal. If you're one of the many parents who couldn't find a Hatchimal (or you weren't willing to pay $200 from a shady reseller), being able to buy the Furby-like creatures should get a little easier now. How quickly will Hatchimals be stocked in stores after the holidays?

The Verge reported that more shipments of Hatchimals will be sent out to stores from toymaker Spin Master through January. Certain Hatchimals can readily be found at Toys "R" Us (though the website for the story is charging $79.99, which is $20 above the toy's retail price).

And although Target doesn't have Hatchimals in stock on its website, it does have limited availability in stores. You can check to see if any stores near you have them in stock by entering your zip code (the closest store to me with any Hatchimals in stock is 14 miles away).

In case you are unaware, Hatchimals hatch from an egg, and once the creature is born, your child can "raise" the the toy across three life stages: baby, toddler, and child.

The hatching of the toy is described as magical, and let's face it — it's the best part of playing with a Hatchimal. Hatchimals are supposed to take about a half an hour to hatch.

Parents who missed seeing their kids light up at playing with their new Hatchimal under the Christmas tree probably wish they could have found a way to get their hands on one. But it turns out that those who missed out on buying a Hatchimal before the holidays may have been better off.

"Unfortunately, with toys that incorporate a high level of technology, there are also some cases where the product may not perform as well as expected," a spokesperson for Spin Master told CNN. "We are committed to doing everything possible to resolve these issues."

Jim Silver, editor in chief of the TTMP toy review website, said he reviewed two batches of Hatchimals: one batch from the toy's first shipment in October, and another from a later shipment. The first batch of the product took a long time to hatch, but those problems were not present in the second batch, Silver noted. “On any electronic product, I generally don’t want the first run if I’m a consumer," he said to the LA Times. “When the hot new things come out, I wait three weeks.”

And with new shipments coming in, not only are the chances of the product being defective lower, you also won't have to fight through hordes of people to get your Hatchimal. Now that's magical.