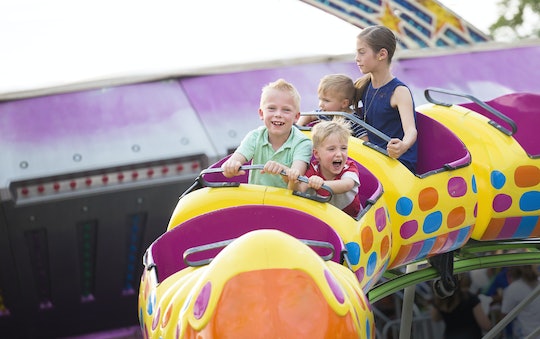 Growing up near one of the country's premiere amusement parks, I was an early lover of all things roller coaster. I adored the thrill of the ride, and sought out trips to my beloved Cedar Point as often as I could. As soon as I was tall enough — around age 9 or 10 — I started riding the really big coasters, and I've never stopped. My kids, however, absolutely hate riding roller coasters, and it boggles my mind. Trying to understand our differences, I now wonder how roller coasters affect a child's brain. What make some kids love it and others loathe it?

Riding a roller coaster is an extreme sensory seeking behavior, according to Neuroscientist. The action triggers the release of endorphins and oxytocin, which in and of itself is something enjoyed by everyone. However, what makes riding a roller coaster different from say, going out for a run or giving a great big hug —two other activities with similar rewards — is the sensation of fear associated with the implied risk of riding a roller coaster, noted a study in PLOSOne. The craving for that risk, that fear, is not universally shared. You either have it, or you don't. Children who love roller coasters enjoy the feeling of the unknown, and seek out that sensation through the perceived safety of an amusement park ride.

I contacted Dr. Kate Labiner, pediatric neurologist at Child Neurology Consultants of Austin, to find out what happens to a child's brain while riding a roller coaster from a physiological perspective. She tells Romper, "There is nothing about a roller coaster in itself which is dangerous to the developing brain. However, there are many reports of children, and even adults, getting concussions from riding on roller coasters." Personally, I happen to know someone who got a concussion from a carnival roller coaster. It was pretty terrifying, but the odds of this happening are very low, as per the Centers for Disease Control and Prevention (CDC).

Labiner says that while there isn't any evidence that roller coasters cause brain damage of any kind (thank goodness for that, my weekend plans are in tact), "The large roller coasters, with lots of high altitudes, back and forth motions, or jerky movements, are the more "risky" roller coasters due to the potential for whiplash injuries which can lead to a concussion." Unfortunately, she also notes that women and girls are more at risk for these injuries due to our longer necks and lack of muscular support in the region comparatively to our male counterparts, but the risk is still extremely low.

Another huge factor in why some kids may love roller coasters may lie in the feeling of relief that happens when the ride comes to its conclusion. A study in Neuropsychobiology found that for bungee jumpers "subjective ratings on anxiety were increased prior to the jump and were markedly reduced after the jump." As someone who has bungee jumped several times, and who loves riding roller coasters, I will tell you that the relief is so much greater than the initial anxiety. It's a full body relaxation that happens post-ride or jump.

The study also showed that there is a stark sense of euphoria triggered by the fear and the activity itself. However, if you're not given toward risky sensory seeking behaviors, it's just one long nightmare. That means what is happening to a child's brain while riding a roller coaster is far from universal. Some children are going to want to ride over and over again, seeking bigger rides and bigger thrills, while others are just fine playing whack-a-mole for a few hours and saying "hi" to a few Disney princesses. It's truly a personal thing.