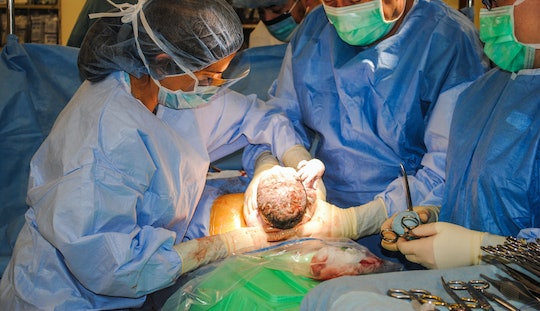 Here's What You Really Need To Know About Repeat C-Sections

Childbirth isn't easy no matter how your child makes it into the world. For many women, that means having a C-section. It seems pretty common to hear about women who have had two or three children (or more) all delivered via C-section, and seemingly without major complications. But how safe are repeat C-sections? In this era of birth choice, you should have all the information you need to make an informed decision about delivering your babies.

There are risks associated with every birth and C-sections are no different. These risks do continue to increase with the number of children born, but the degree to which the risk increases isn't as significant as you might think. According to the Mayo Clinic, while "each repeat C-section is generally more complicated than the last," even if you plan to try a VBAC (vaginal birth after cesarean) you may still end up having another C-section. Some of the ways a C-section may affect your body are excesses of scar tissue, bladder or bowel injury, and heavy bleeding that may worsen with each progressive surgery. Most of the risks associated with repeat C-sections are primarily concerns regarding the surgery itself, and not the long-term damage your body incurs from childbirth.

The Mayo Clinic does note that the potential long term effects of repeat C-sections are great enough that it's not recommended that a person have more than three C-sections in their life. The main cause for concern is the scar tissue that C-sections leave behind. Whether it's the normal bikini cut or a transverse (up and down) cut, there are layers and layers of scar tissue that develop after surgery, and each subsequent C-section just compounds that issue.

According to Clinical Case Reports, this scarring can lead to something called uterine scar dehiscence. That's just a five dollar word for a scar that looks and acts like a pair of overstretched and over-worn yoga pants. It becomes thin and starts tearing. Unfortunately, because it's in the wall of the uterus, it can lead to rare severe complications such as infertility and even death. As per Uterus and Ovary, "Cesarean scar dehiscence can present in multiple ways. The presentation may be silent in many, but may cause symptoms like dysmenorrhea, inter menstrual bleeding, irregular genital bleeding, chronic pelvic pain, dyspareunia, and secondary infertility."

In an interview with The Scientific Parent, Dr. Jean-Giles Tchabo, an OB-GYN in the greater Washington, DC area said that "...when you have multiple c-sections, the scar tissue can weaken and become very thin from being cut repeatedly. That weakened scar can cause very serious complications, that’s when you start to really worry about uterine rupture and placenta accreta. Those are two complications that can lead to the death of the mother, the baby, or both."

Dr. Tchabo went on to say that there's not a great way to determine potential problems with scar tissue. Ultrasound is one option, but it's not fantastic. Further in the series of interviews, he said, "If the mother is a good candidate, a repeat C-section carries more risk than a VBAC. Additionally, the recovery from a vaginal birth is usually easier for the mother than recovery from a C-section."

It's a difficult choice to make between yourself and your physician. According to a PLOS One study, the condition of which he was speaking — placenta accreta — is a rare complication wherein the placenta grows too far into the uterine wall.

On the flip side, researchers also noted that a repeat C-section significantly decreases your risk for uterine prolapse and urinary incontinence as compared to vaginal births. As for the aesthetics of your body, there are some changes. Because they cut through the muscles, your muscle tone might never be exactly the same as it was before you gave birth, according to Shape.

But that's not the only muscular concern either. Sometimes, they just really hurt. Dr. Jen Gunter wrote on her website, "The two main causes of post C-section pain are nerve pain and muscle pain. Muscle pain is actually the most common cause of chronic pain overall. Muscle pain can happen spontaneously; however, it can also be triggered by trauma (like surgery or childbirth). Throw in the hormonal changes of pregnancy and delivery, as well as the lack of sleep and the stress of caring for a newborn, and you have many of the ingredients for a chronic pain condition."

It all looks scary, and it is, but remember all birth carries risk. I gave birth to my children vaginally, and now I pee a little every time I get a cough. Childbirth damages your body, but talk to your provider, weigh your options, and do what's best for you and your baby. Who knows, you may end up with a VBAC and be on Team Pee Yourself next time.