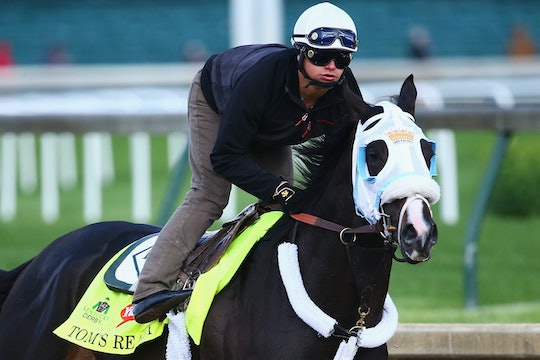 How Safe Is Horse Racing? It's One Of The Most Dangerous Sports In The United States

Kentucky Derby got you feeling inspired? The two-week horse racing party in Louisville, Kentucky, has a lot to offer that gets people pumped up: those otherworldly hats, the announcer's voice rallying the crowds, and the sound of horses thundering away from the start line. But when you dig beneath all of that, how safe is horse racing, for both the horses and the humans involved?

Churchill Downs, where the Kentucky Derby takes place, was reaccredited by the National Thoroughbred Racing Association's Safety and Integrity Alliance just last month. "The health and safety of our athletes, both equine and human, is of utmost importance to all of us at Churchill Downs," Kevin Flanery, president of the Churchill Downs racetrack, said in an NTRA statement. "We’re proud to participate in the accreditation program – and have since its inception – as it is a true demonstration of our commitment to safety and integrity."

The racetrack also has its Safety from Start to Finish program, which reiterates safety protocol for horses and racers, including the presence of certified veterinarians and equine ambulances. There are also EMTs and ambulances available for jockeys, should they be injured while racing. There are also rules in place to discourage steroid use, animal abuse, and unsafe practices.

However, many outsiders say horse racing is a dangerous sport. It came under the spotlight in 2008, when Kentucky Derby racing horse Eight Belles broke both front legs while racing and was euthanized on the racetrack. With pressure from Congress, the horse racing industry improved its safety standards, according to The New York Times. A 2012 investigation by the newspaper found that an average of 24 horses die a week on racetracks in the United States.

In the course of two years, there were more than 3,800 cases of illegal doping of horses (which, the Times reported, doesn't fully capture the problem, since only a small percentage of horses are tested). During that same span of time, 6,600 horses either broke down or showed signs of injury on the track.

Unfortunately, horse racing is a business — and, financially, horses don't come first very often. "When you have less expensive horses, it [still] costs money to feed them, to care for them, to shelter them," Joe Drape, the Times reporter behind the investigation, told NPR. "And there are unfortunately, we are told, some owners who say, 'Well, why do I want to spend all this money on a cheap horse? Let's throw him out there. He may win. He may not. And if he doesn't win and he breaks down, then it's not my problem anymore.'"

Often, when horses go down, their jockeys get pitched onto the track and injured, too. Jockeys have been killed on the track by horse hooves to the head, been paralyzed after receiving broken necks from throws, and suffered injuries from trampling. According to CNN, who spoke to the national manager for the Jockeys' Guild, jockeying is the most dangerous job available in sports due to its number of injuries and deaths. In 2011, 19 percent of active guild jockeys were out on temporary disability.

After all, horse racing is a business — and a dangerous one, that often has unsavory aspects mixed into it. Since public scrutiny has increased, standards have somewhat improved, but it's nearly impossible to make horse racing a safe sport for horses or their riders. Yes, many trainers, vets, and jockeys care deeply for their horses and conduct themselves to a high standard. But, as Andrew Cohen wrote for The Atlantic, "If the sport cannot find a way to rid itself of a culture that abides all of this it not only won't survive—it won't deserve to survive."

As it currently stands? Horse racing continues to be one of the most dangerous sports in the United States, and horses and humans are, unfortunately, injured or killed on the tracks too frequently.