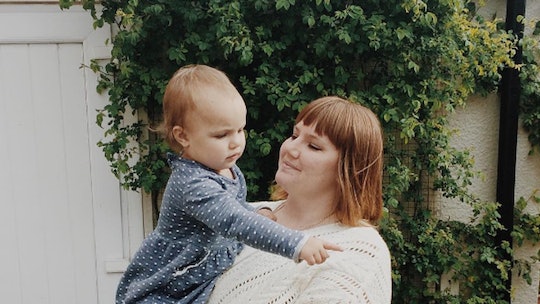 How Mainstream Feminism Is Hurting Moms

There is no one kind of feminism, and my personal views have evolved from my naïve and inexperienced adolescence and the first experimental years of my womanhood. But at age 30, as I entered motherhood, I began to realize that mainstream feminism, especially when coupled with sameness-based feminist ideas, is hurting the way I see myself as a mother.

My social media feeds are full of women's and mothers' empowerment. The types of accounts and media I tend to follow offer a plethora of this sort of stuff — specifically about being a working mother — but lately I've engaged in more conversation over the question of my being enough as I am without career victories or accolades or a huge online following. Without constantly pushing forward into a new space. Without any other titles. Just me — mama.

Many of the developments we have celebrated as feminist victories — lactation rooms at work! The Family Medical Leave Act preserving our jobs for a whopping 12 weeks! No-period hormonal birth control! The ability to bring babies onto the floor of Congress! — do help some mothers. But they are often geared toward allowing a woman to keep her place in a system designed for, and run by, men. The onus in a world focused on "equality" — on egalitarian feminism — is not on adapting the world to a woman's needs and desires. So instead of wondering how to support women who leave the workforce, the discussion focuses on how to get them back in as soon as possible, or how to help them straddle the two worlds.

And I get why: feminism is more palatable (read: less likely to be accused of "man-bashing") when we emphasize it as a fancy word for equality than we we brand it with BOW DOWN WITCHES merch.

But as a mom, that strain of feminism doesn't do anything for me.

I feel like the temptation to fit in the 'male' shape means neglecting things like my relational, nurturing, sensitive nature.

It doesn't take much for a new mom to start doubting herself. One of the trickiest conflicts I've encountered so far is my identity postpartum. When speaking about this issue, I've not once come across another mom who didn't also struggle with the massive transition into motherhood. How do I reconcile what I feel as a mother (which ranges from the frustrating get-me-the-hell-out-of-here instances to the precious nowhere-I'd-rather-be moments) with what society is telling me a strong, powerful feminist woman or feminist mother is?

Mainstream feminism and egalitarianism frankly ignores me as a woman. It discounts my important and intrinsic distinctions from a man and a man's profound differences from me. When I'm supposed to be the same as a man, I feel like the temptation to fit in the "male" shape means neglecting things like my relational, nurturing, sensitive nature (traits often synonymous with motherhood). These characteristics do not equal weakness. And I'm disappointed with parts of feminism that continue to see it as such — exactly as misogynist mentalities do — which is counterproductive to female and mothers empowerment. Instead, it makes me feel inadequate.

When men are supposed to be the same as a woman, they have to deny their own power so as to not make women feel "small." No woman or man should ever have to diminish themselves in order to make me feel as important as them. Women are already inherently just as important as men: the crucial challenge feminism needs to continue to fight so that humanity finally operates in this truth should be founded and deeply-seated in that principle — instead of striving for it at the expense of the minimization of men.

If we're supposed to be morphed into a genderless being, the apparent intention is to encapsulate all that a man and a woman is in one person. No one can fulfill that — that pressure is just too much. In this sort of feminism, moms are supposed to be the caregiver, the bread-winner, the nurturer, and the assertive one. It's as if a good feminist mother (who is stereotypically cis-female, white, and has a cis-male partner) can only be the one that mothers her children whilst starting a new business or attaining the top position in her career or having something else on her plate, because she better not neglect her non-mom aspirations since men don't go around doing that.

Is being a good mother and a good partner in my preferred rhythm not enough? The gap I can't seem to fill and the pressure that creates to be something I don't necessarily want to be is off-putting. I can't be absolutely everything for my daughter. By the way, the single moms who have no choice but to do it all are absolute heroes, but the single moms I know haven't boasted in this amazing strength but recognized it's hard as hell. Why does mainstream feminism put this pressure on moms to do it all? It doesn't work for any parent, solo-parenting or not, to do it all. We all need help.

I want to show up and be "me" for my daughter. Even if that means looking more like a traditional woman in some ways, then so be it. The point I want my husband and I to display to our children is that whatever our roles look like at different times in life is because of our freedom to choose what works best for our family based on our personal preferences and not societal pressures — even the ones put on us in the name of feminism. That's just another form of oppression.

Men aren't being championed to be their best selves in the current paradigm.

Don't get me wrong. Restrictions on women in the workplace, unequal pay, forced gender roles or pressure to stay in gendered tasks or jobs — and many other tensions that feminism seeks to remedy — is all wrong and definitely necessary to address, but we need to also realize that the model of work and family life currently (and traditionally) in place for men isn't working either. Men aren't being championed to be their best selves in the current paradigm. I don't need any other proof than the disheartening suicide rate for men being consistently higher than women. We need just as much change in perspective for the way it works for men, so I definitely don't understand the odd default to place women in a box that's actually already broken as well. As Mary Beard, scholar, classicist, and author of her 2017 book Women & Power: A Manifesto, said, "You can't easily fit women into a structure that is already coded as male; you have to change the structure."

Perhaps mainstream feminism doesn't want to admit it, but one of the most feminist things I can do is embrace what makes me a woman with a diverse range of skills, desires, and dreams and never apologize, ignore, or hide it. That is, after all, what I'm teaching my own daughter to do.

More Like This
When Does A Baby Recognize Their Father? A Pediatrician Explains
Why You Should Go Ahead And Have That Fourth Baby
The Best Dressed Parents At The 2023 Grammy Awards
Adele’s Grammy-Nominated Album Features A Beautiful Song Written For Her Son Angelo
What Parents Are Talking About — Delivered Straight To Your Inbox