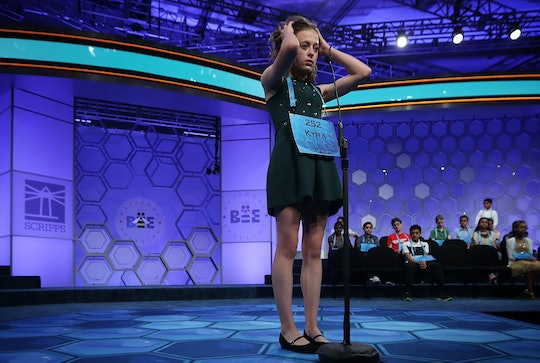 How Should My Kid Study If They Want To Be In The Scripps Spelling Bee? It's Not Easy

The Scripps Spelling Bee is starting its final rounds on Thursday, so the competition is about to get very fierce. After three grueling rounds of preliminaries, only the best of the best remain. If you're new to the spelling scene, the Scripps Spelling Bee is where the winners of regional contests go to face off against other top spellers from around the country. It's been around since 1925, and since its inception it's grown, crowned 93 champions, gotten ESPN coverage, and gained a cult following. If you've tuned in and wondered, "how should my kid study if they want to be in the Scripps Spelling Bee?" all your questions will soon be answered. It's a bit too late for your kid to join this year's competition, but that just means they've got another year to prepare for this battle of the brains.

Before getting into the herculean task of studying the Webster dictionary, check to be sure your child is eligible for the Scripps Spelling Bee in the first place. According to their site, students must "neither turned 16 nor passed beyond the eighth grade" to join in. They must also be enrolled at a participating school and have taken part in local spelling bees. If they have, and they've won, they can apply for the big leagues: a coveted spot in the Scripps Spelling Bee.

As you might imagine, there are many, many methods for studying for this bee. Here are just a few to try out:

On the Scripps Spelling Bee site, the organization outlined a "simple" (looks more simple than it really is), stepwise training plan for the aspiring spelling champion. First, learn the 100 study words for your kid's grade level. Your kid will have to ask their teacher or spelling bee point person to log into a special part of spellingbee.com to access those words. Step two is learn all the words for grades 1-8. Easy, right? Ha. Good one, Scripps. Third, move up to the Merriam-Webster resources. The Scripps Spelling Bee uses that dictionary, so try not to stray from it. First, learn everything on their site, Spell It! Then, try playing every word game on Merriam-Webster's Word Central, forever.

Make Some — Okay, A Lot — Of Flashcards

According to CBS News, Snigdha Nandipati used 30,000 flashcards to memorize her way to victory. To prove how effective this kind of repetition can be, know that she took home the 2012 National Spelling Bee trophy. Not only did she make paper flashcards, but her dad also designed a computer program to test her on the hardest words. Thanks, dad! If you're not a programmer, don't sweat. There are tons of spelling flashcard programs and apps out there to choose from.

The road to the top can be lonely, but it doesn't have to be! Encourage your kid to find a study partner so they can practice together. Having a friend to study with can be extremely motivating because it makes the task fun and social. It can also push them to make more difficult goals. Sure, things may get a little tense once it's time to face off, but that's just the way it goes.

Spelling isn't the only skill your kid needs to master to win the Scripps Spelling Bee. Spelling is a big part of it, but they have to be able to do it when it counts: in front of a huge live audience, judges, friends, family members, and whoever is watching ESPN. Saying it's a lot of pressure would be an understatement. To prepare for that moment in the sun, have them practice spelling in front of an audience. That audience can be you and other family members, but also encourage them to practice their speaking skills at smaller bees, in theater productions, or on the debate team. Here's a classic Scripps moment of a contestant losing his cool (and pulling himself back together). In Kennyi Aouad's defense, that word is hilarious.

It's impossible to learn every word (many have tried), so your kid has got to learn to make some very educated guesses. During the course of the Scripps Spelling Bee you will no doubt hear contestants asking, "What is the language of origin?" They're not just showing off; they are trying to figure out how that word is probably spelled based on its linguistic history. Knowing suffixes like -mania are from Greek or prefixes like ad- are Latin is just the tip of the iceberg. Those little bits of information can go a long way.

These methods are tried and tested, but, of course, everyone is different. Your kid might like to sing words in the shower at the top their lungs or read the dictionary backwards while hanging upside down or watch foreign films or write every word in the English language down three times — whatever works.