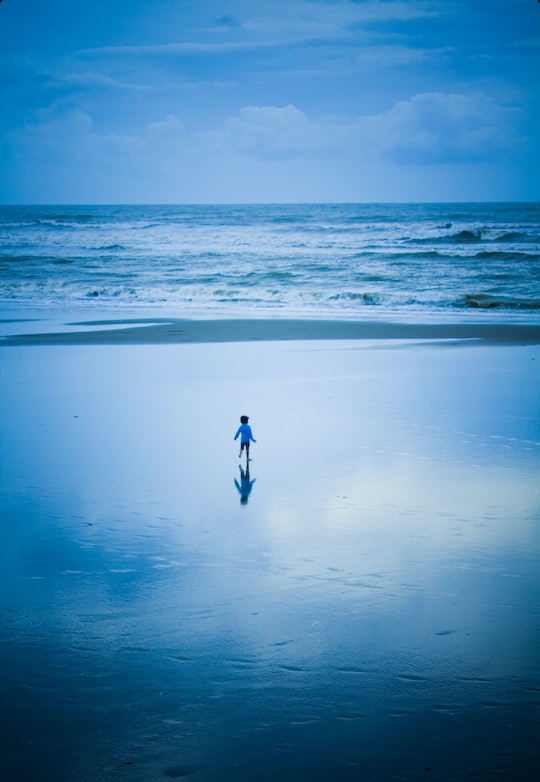 About a month into lockdown, my toddler did something curious on our walk to the grocery store. When she saw someone approaching us from the opposite direction on the sidewalk, she backed up against the wall of the building next to us and waited for them to pass. Later, while standing in the line wrapping around the grocery store, she left a huge gap between her and the person in front of us — without my prompting. She's not yet 3, but after weeks of observing the repelling magnet dance of social distancing, she seems to have internalized the need to stay away from other people.

To some extent, this came as a relief. Her ability to respect the rules of social distancing without constant reminders has made our walks and sometimes necessary grocery runs less anxiety inducing. But it also gave me pause — how is this shaping her understanding of the way humans are supposed to interact?

She doesn't have the capacity to understand that these are temporary measures being taken due to unusual circumstances. Social distancing is being woven into her understanding of normal human interaction along with any other form of social etiquette: Say “please” and “thank you,” don’t talk with your mouth full, and always leave at least six feet between you and anyone other than your parents, little sister, or dog.

If all goes well, social distancing restrictions will eventually lift, but it’s hard not to wonder whether they’ll have a lingering effect on children's understanding of personal boundaries.

My curiosity led me to Dr. Michael Graziano, a professor of Psychology and Neuroscience at Princeton University, and the author of The Spaces Between Us: A Story of Neuroscience, Evolution, and Human Nature.

According to Graziano, personal space is not just an abstract personality trait, but a neurologically rooted protective mechanism maintained by a network of peripersonal neurons that monitor the space around the body. This network acts like an “invisible second skin,” keeping track of objects around us. It’s what allows us to navigate through a room without running into furniture, or duck when a pigeon swoops. It also allows us to organize and regulate the space between us and other people.

This protective buffer of personal space isn’t fixed. It’s situation-specific, and always in flux, shrinking toward family members and loved ones, and expanding toward strangers.

As such, personal space plays an important part in human interaction, shaping our interpersonal judgements and behavior. The highly nuanced nature of this social dance means that seemingly small dysregulations in personal space — a boss who leans a few inches too close to you during a conversation or a stranger who sits next to you on an otherwise empty bus — can have a big impact. We don’t notice personal space when it functions well, but it can be confusing and off-putting when it doesn’t.

In this way, personal space is shaped by our experiences. “One of the most consistent findings is that women have larger personal space than men,” says Graziano, “probably because of culturally learned anxieties and safety issues.”

The animal world provides illustrative examples of how experience can alter personal space. Like humans, animals maintain invisible bubbles of protective space around them at all times. If a perceived threat enters the space, the animal will move away to reinstate it. In his book, Graziano tells the story of a 20th-century Swiss doctor who was tasked with clearing the sparrows from the grounds of a nursing home using a shotgun. At first, the sparrows maintained a distance of about 30 meters from the doctor, but after many died, that buffer increased to 150 meters.

The present pandemic may trigger a similar effect in humans, even after social distancing restrictions have lifted. Strangers that we previously felt comfortable brushing shoulders with for the sake of a seat on a plane or train now represent a credible threat to our personal safety. Like the sparrows, our personal space bubbles are expanding in response.

It’s important to recognize that the underlying spatial mechanism isn’t being rewired. “What’s happening is a situation-specific increase in anxiety,”Graziano explains. It won’t impact how we space ourselves around family or friends, but only strangers, whose whereabouts and travel patterns are unknown to us.

“That kind of hyper-awareness of strangers and anxious distancing may be learned, and may persist in our culture longer than anyone wants it to.”

In that sense, children, who are still early in the process of developing interpersonal caution, are most vulnerable to the effects of this hyper-vigilance. But they are also more easily shielded from it.

The key is to keep children’s anxieties at bay. “Don’t let children think that social distancing is a matter of stress and fear, because they will definitely absorb that emotion and keep it with them, and it will affect how they interact with strangers for years.” He acknowledges that de-stressing may be difficult under the present circumstances, but that anything we can do to ensure that children feel safe will help. “Perhaps make it into a game, something fun and calm, rather than an exercise in fear.”

In other words, my daughter’s lack of understanding of the reasons for social distancing is actually a good thing.