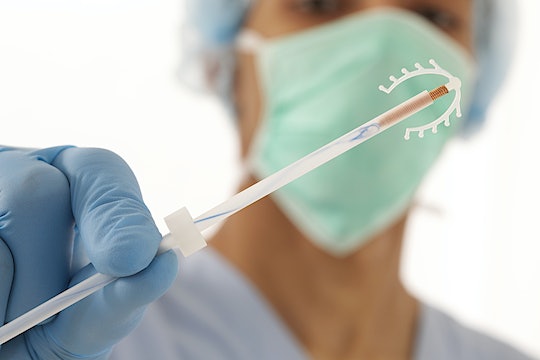 How Soon After Birth Can You Reinsert An IUD?

If you use an IUD — the T-shaped device inserted by a doctor into your uterus for birth control —you might want to get back to your routine after delivery. It's safe to say you have your hands full with your new baby, and IUD is a perfect no-fuss form of birth control for a sleep-deprived new mom. But, exactly how soon after birth can you reinsert an IUD? Well, the answer to this question varies depending on who you ask.

Because an IUD, whether it's hormonal or copper, requires a trip to your doctor's office for insertion and removal, the good news is, you're definitely going to be consulting your physician on this one. So, you don't have to make the decision alone.

According to Bedsider, an IUD is safe to use if you're breastfeeding and won't harm your baby. And though breastfeeding might keep you from ovulating, it might not. Just a little reminder to to stay on top of your postpartum birth control, and not to rely on breastfeeding to avoid pregnancy. Additionally, Besider noted that some doctors believe it's totally fine to reinsert an IUD immediately after giving birth. However, a study published in the United States Library of Medicine suggested that spontaneous IUD expulsion may be very high immediately after birth.

So, although it's very convenient to have your doctor set up your postpartum birth control routine while you're still under his or her care, you might also consider waiting four to six weeks postpartum to schedule an in-office visit.

Some more good news: because your cervix has already opened up and dilated (during delivery) you will feel less cramping during and post insertion of your IUD than before you gave birth, according to Fit Pregnancy. Not too much of a shocker there.

When planning for your new arrival, it's important to consider what you will use as birth control postpartum, so that's one less thing to worry about when your baby arrives, and in those few months thereafter. Postpartum birth control is super important, and an IUD is a great choice because it's very reliable. A study published in the American Journal of Obstetrics and Gynecology recommending that women wait until 18 months postpartum before trying to conceive again lauded the efficacy of an IUD, claiming this type of birth control helps women meet that 18 month mark. So, score!