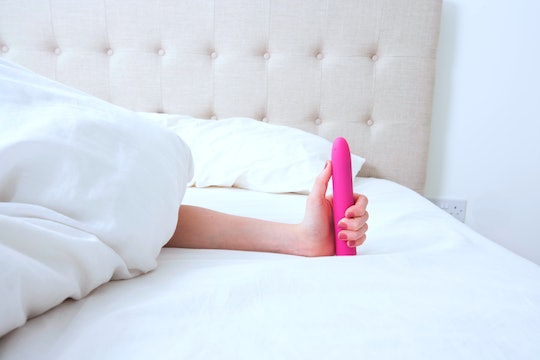 It turns out, a lot of it depends on how you gave birth and how you're healing. Each woman and each birth is so individual, which is why doctors typically give their patients a range of time as to when they should expect to be healed enough for amorous encounters or a quick trip with your battery operated buddy when your baby naps. While there's no set period of time that is optimal, according to the American College of Obstetricians and Gynecologists, most doctors tell their patients to wait four to six weeks for penetrative sex. However, the organization also noted that the risk for infection diminishes greatly after two weeks, provided there was no episiotomy or fistula formation. So as long as you're comfortable, you're at a lower risk of complications from non-penetrative play at that time.

As for women who've given birth via cesarean section, it might be a hair different for them. For one, if you've had a C-section, your body just underwent major surgery. The healing process is longer and more involved. Your baby still opened a new one for you, right above your pelvis, where all those muscles contract with orgasm. According to the OB-GYN Women's Center, you really need to get a full workup at your six week postpartum appointment before you give yourself a full workup with your pocket rocket.

If you're just starting out in the land of the vibrator, you're probably going to be tempted to discreetly order one on Amazon, but be warned. Many of these are from disreputable third-party sellers making them a risky bet. If you choose to go with Amazon, there are a few tips to keep in mind. First, make sure it's being sold from Amazon itself, not a third party. And second, read all of the reviews — or a lot of them. They'll give you a good idea of how it works, if it's a strong or weak vibration, and the like.