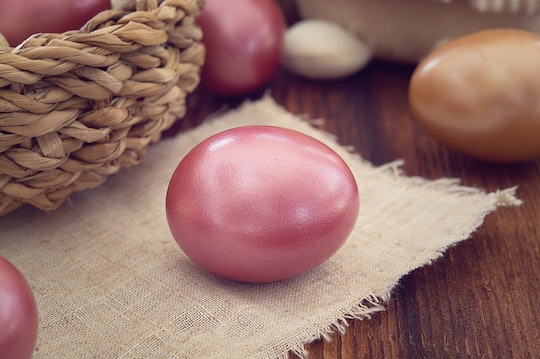 How Soon You Can Use An Egg Postpartum

Thanks to Gwyneth Paltrow, I recently learned that there is an egg other than the kind you crack over a frying pan for breakfast. The concept has drawn both positive and negative attention, as well as a number of questions. For postpartum moms in particular, knowing how soon you can use an egg after birth may come to mind if it's something you currently utilize or are interested in trying out to strengthen your pelvic floor postpartum.

In a nutshell (eggshell?), Love Stone noted that a yoni egg is used to strengthen the pelvic floor. If you dive a little deeper, however, the egg is supposed to improve sexual power, chakra, sensuality, and general health. Additionally, Chinese medicine believes that the egg prevents the life-force from leaking through the pelvic floor if those muscles are weak. Love Stone also noted that the yoni egg is commonly referred to as a love egg or jade egg as well and is capitalized upon as a longtime secret of royalty in China.

There has, however, been some controversy surrounding the ideas behind the practice of using a yoni egg. In a response letter to Gwyneth Paltrow, to keeping the egg clinched in the vagina all day to exercise the pelvic floor, gynecologist Dr. Jen Gunter said the idea of keeping the egg clinched in the vagina to improve pelvic floor muscles is nonsense and could potentially increase the risk of bacterial vaginosis. She did, however, note that pelvic floor exercises can help with incontinence and allow for stronger orgasms. So in the spirit of compromise and neutrality, if you're wanting to try a yoni egg (or currently use one), make sure to keep your egg clean and exercise some caution in length of time you keep the egg in your vagina.

When it comes to strictly figuring out the length of time you need to wait after birth to use a yoni egg, Native You suggested asking your doctor first. The site also noted that it's recommended after the first six to eight weeks postpartum. As a rule of thumb, the large majority of doctors will tell you to wait at least six weeks before any sort of intercourse or penetration into the vagina, objects included. After you've been cleared and healed, however, there's no reason related to childbirth that this isn't something you can't test out for yourself. And hopefully even build up your pelvic floor muscles again in the process.