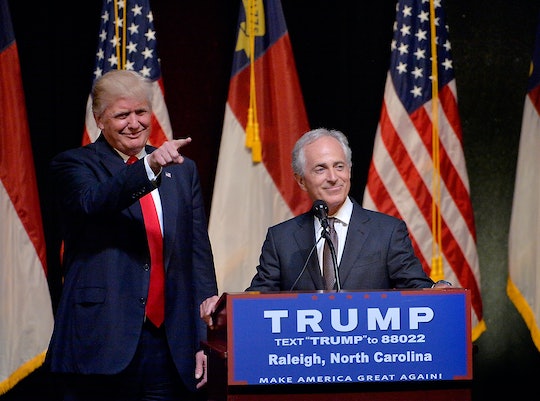 How Soon Will Republicans Repeal & Replace Obamacare? It Could Happen Quickly

With a previously estimated timeline of three years, it once seemed that Republicans were taking a slow and steady approach to healthcare reform, weighing all sides and writing a cohesive healthcare replacement plan. Now, though, a much more expedient method has been considered. So just how soon will Republicans repeal and replace Obamacare? Tennessee Sen. Bob Corker is suggesting a simultaneous repeal and replace that would start as soon as possible.

"Why would we put off for three years doing what we know we have to do?" Corker asked reporters on Capitol Hill this Tuesday. Optimistic in his outlook, Corker said "it doesn't seem to me that it would really take that long to come up with a replacement," believing that immediacy and "momentum" would be key to a successful repeal and replace. "Are we better off on the front end right now just replacing it and being done with?" he postulated. Also speaking to the need to repeal immediately, a senior Senate GOP aide reportedly told The Hill: "We want to give the president the tools to do what he wants on health care.... We want to set the table for him. Why wait?"

The previously proposed repeal and delay strategy necessitated that Republicans pass a repeal bill now, but would then take about three years to come up with an alternative — one that would, notably, require 60 votes in the Senate in order to pass. Seeing as they need a bit of bi-partisan support, Republicans then must write up a bill that (some) Democrats can get on board with. The alternative? An ambush: "Blow up the law and try to coerce Democrats into giving [the Republicans] cover," NY Daily Mail summarizes.

Other Republican lawmakers have also prioritized speed, but they haven't commented on immediate replacement in the same fashion. "I can tell you where we're going to start: with a process to repeal and replace Obamacare," Senate Majority Leader Mitch McConnell said this week, regarding Republicans' priorities. Senate Budget Committee Chairman Mike Enzi appeared to hint at expediency, admitting that "it's going to be a transition to repeal [it]," while insisting: "We’ll be moving it as fast as possible, but it will be subject to change."

Republicans' plans could be easily thwarted, however. Democrats will likely want to resist passing any sort of Obamacare replacement in hopes of gaining more sway in the Senate in coming years, thus halting Obamacare's replacement completely. Seeing as Obamacare repeal tops the Republicans' to-do list, we're likely in for a healthy dose of political stalemate.