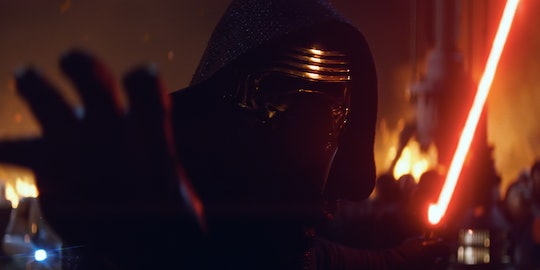 How 'Star Wars: The Force Awakens' Tapped Into Our Most Shared Experience

On Fri., December 18 at midnight, theaters across the world debuted Star Wars: The Force Awakens. I was among the eager and excited, reminded of how much the Star Wars franchise meant to me as a kid, and how much it’d mean to me now, as a mom. After seeing it in theaters, I was again reminded how much Star Wars: The Force Awakens talks about choice, arguably one of our most human qualities. Yes, the films hinge on evil vs. good and light vs. dark, but between the two is the story of choice — and how powerful ours can be. In a galaxy far, far away, legions of characters were struggling with our most basic trait, and I was floored.

I was just 5 when I saw Star Wars for the first time, and even though I didn’t truly understand the films, they stayed with me. When I was 10, I watched Star Wars Episode IV: A New Hope with my dad, and I was hooked. I was drawn into the world that painted the picture of good vs evil. I imagined a galaxy that was as beautiful as it was intimidating. I wondered if I could rely on something like the Force to carry me on Earth, supporting me while I fought against much bigger enemies. At just 10, I wondered, how do you stay consistent and steadfast in your beliefs when darkness seems to reach every around corner to grab you? Even then, I knew you had a choice. After seeing Episode IV, I insisted on watching the rest of the movies, and ever since then, they’ve stayed in my heart. Star Wars is practically a part of me. I love it with a very fierce love.

My daughter was 3 when she discovered Darth Vader, and for some reason, she was tied to the idea that he had good inside of him. At just 3, she had already clung to the belief that Vader had a choice, and although he'd made one arguable poor choice, it didn't mean he couldn't make another. It didn't mean he couldn't choose to be good again. My partner and I let her watch the films when she was about 4, and she was so excited when Luke found out his father was Darth Vader. When Vader removed his mask, she exclaimed, “I told you he was good!” It reminded me of when I first watched the movies — captivated by a world of good and evil; amazed by the power we all carry within us. One of the best things those films gave my daughter and I was Princess Leia. She was lovely yet strong. She wasn't in need of a man to rescue her, because she was capable of taking care of herself. She was loved — and loving. She fought for what she believed was right, even if others wavered. She was a female character we weren’t always used to seeing next to strong male leads, and my daughter and I adored her.

I’ve had my Star Wars: The Force Awakens tickets ready since it was first announced that we could purchase them. I imagined over and over again what it would feel like to experience another all-new film. When we’re first introduced to Rey in the film, I realized that she carries with her a goodness, a theme we see so clearly throughout Star Wars, and it was something I couldn't wait to share again with my daughter. Like Leia, she stands in the goodness, firm in her beliefs on what is right. She proves that goodness isn’t necessarily about seeing things in black and white; it’s about giving the space and the opportunity to listen to others who aren’t the same. Watching Rey, I realized what she is is what I strive to be: good, and not because I need to be, but because I choose to be.

Star Wars is built on the premise of choice: You choose between good vs. evil, and again between light and dark. The earlier films didn’t really highlight the shades of grey that live between the two, but the The Force Awakens did. As parents, we teach our children to be “good” and to shun what is “bad.” We correct them by saying, “don’t be bad, be good!” We remind them that “being bad” is a path you don’t want to start down — because when you do, it's much harder to turn around. But there isn’t a mistake that you make you can’t make better. There isn’t a wrong you can’t make right. You always have a choice. The very heart of Star Wars is about that choice. As a parent, I’ve tried hard to avoid using words like “good,” and “bad” around my kids. I want them to focus more on their choices.

At its most human, Star Wars is a tale of choices. Luke, Leia, Han, Vader — their stories are littered with the choices they've made. They may be living in an entirely separate galaxy, but their choices are not so very unlike our own.

Once, my son looked at me after being reprimanded and cried out: “I’m bad now!” In his mind, he’d done a bad thing, and therefore he was bad now. My heart broke, and I insisted he could be good. It awakened me to the struggle that is at the very heart of the franchise I love most: What is your choice? So I did what the movies taught me: I reminded him that two very different, very distinct extremes exist inside of us all, and on any give day, we get to choose which we are. We can be both at once, and we can be one or the other at times, but those moments don’t define us — they only help shape us into who we are.

The Force Awakens is the perfect example of the battle between two extremes and the choices we make in the face of such challenges. At the end of Episode VI, after Luke has fought his father and defeated him, we finally get to see the person behind the mask. We’re finally able to see Vader’s choice. We see the man Luke believed had some bit of light still left in him, and Vader proves to us that he does. Even then, after all of the evil things he has done, there’s a trace of light, and while it didn’t present itself as strongly, it was never truly leaves him.

I reference this moment in the films to my children often. I remind them that we can choose to be people who are cruel and who are cold, but it only takes the tiniest bit of good — of light — to coexist. Our futures are not cemented when we’ve done something wrong. The Force Awakens reminded me something every Star Wars film has made visible to me: Even at our darkest and our most evil, the choice between the light and the goodness are never far away.