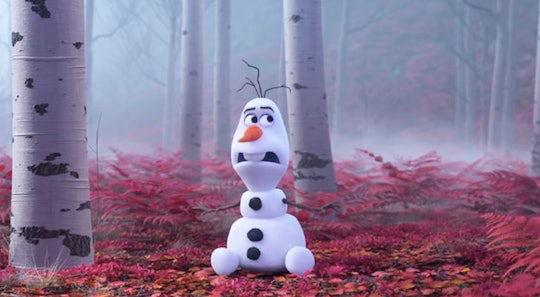 Flicks And The City Clips/YouTube

Um... Is It True 'Frozen's Olaf Is Alarmingly Tall? Here's What's Going On

Just when you thought the horror of gigantic cartoon characters was over (remember when Peppa Pig was supposedly 7'1”?), a disturbing claim about the height of Frozen's Olaf surfaced on Twitter. You might want to sit down for this, but Olaf is supposedly 5'4". If that's not enough to haunt your dreams, I'm not sure what will do the trick. But before you lose any sleep over this random piece of information, it's important to point out this might be a hoax.

OK, let's jump right in: On Friday, a Twitter user simply tweeted, "Olaf is 5'4". To back up this eerie info, they included some visualizations of adult-sized Olaf to pull the creepy picture together.

So where did all of this come from? Look no further than a previously edited entry in Frozen 2's Fandom Wiki page. "Olaf went with Anna and Elsa to the courtyard to greet the citizens, and wait for the Yule bell to arrive," the edited version read in reference to the featurette, Olaf's Frozen Adventure, according to POPSGUAR. "While waiting, he borrowed a ruler from a citizen, and found out he was 5 foot 4 inches tall."

As for the original tweet trumpeting Olaf's supposed height, it has 281,000 likes as of Monday.

The amount of likes on this tweet speaks for itself, but here are some shocked reactions to put the wave of hysteria into perspective.

"IF OLAF IS 5 FEET AND BARELY REACHES ELSA'S HIP HOW FUCKING TALL IS ELSA, ANNA, AND KRISTOFF???" someone tweeted about Olaf's co-stars. "HOW HUGE IS SVEN??? NEW THEORY: FROZEN FEATURES A RACE OF GIANTS."

Someone else said: "I refuse to believe that Olaf is 5ft4 that’s just scary."

"I truly believe we all should refuse to believe this canon height of Olaf. not possible," another commenter penned. "Example: they are kneeling to talk to him!

And one person delivered the most excellent joke: "Everyone stop panicking, men always lie about their height on the internet #Olaf."

As these commenters pointed out, it's pretty much impossible for Olaf to be 5'4". One Tumblr user, “goldfishturtle," confirmed this probability in 2014 using measurements from the door at Oaken’s Trading Post, writing, “A conversion rate between [real life] height and ‘verse’ height for this particular scene was created. For every inch measured with a ruler, the equivalent height in verse is ~11.07 since it is assumed the doorknob is 3 feet off the floor."

The analysis continued, "I can then calculate Anna’s height as shown in the second photo. The gap between her head and the six-foot mark is approximately 11.8 inches which is rounded then to one. From there on, I created a conversion knowing Anna’s height by measuring her with a ruler, measuring the second character with a ruler I can apply the conversion and calculate their heights.”

In conclusion, it's likely Olaf is 2'6", which makes much more sense. Phew.