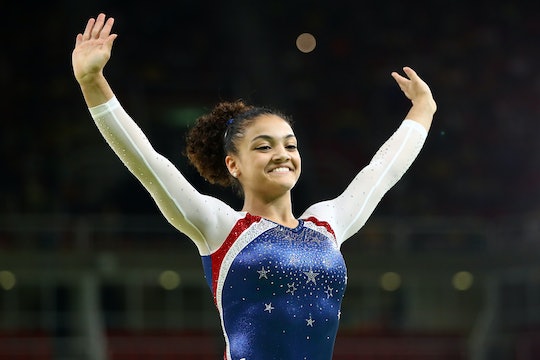 How Tall Is Laurie Hernandez? The 'Dancing With The Stars' Competitor Is Ready To Dance

I predict that the competition this season of Dancing With the Stars will be the most heated its ever been. (Once Rick Perry is eliminated Week 1, obviously). Among the most eagerly anticipated participants is Laurie Hernandez, the Olympic gymnast who will be dancing with the tall, dark, and handsome Val Chmerkovskiy in hopes of winning the Mirrorball. Height discrepancy aside, I think there's an excellent chance that this duo might just win the whole damn thing. But, there's no doubt that her height will come up on the show, so just how tall is Laurie Hernandez? She's 5 feet, making her just barely tall enough to ride most roller coasters. But don't let her small stature fool you. This Olympian is made up almost entirely of muscle, and is probably stronger than most humans alive. Honestly, what challenge could Val throw at her that she wouldn't just backflip over?

Female gymnasts are often known for being short in stature and high in muscle mass. Their bodies are compact, at once impossibly bendy and inhumanly powerful. For example, Hernandez's teammate Simone Biles is two inches shorter than her, and just two pounds lighter. One look at Hernandez's floor routine will tell you basically all you need to know about her grace and athleticism.

Her Dancing with the Stars partner, Val Chmerkovskiy, is 6 feet tall, making him an entire foot taller, as well as over a decade older than her. While it might seem like a rather odd matchup, I think it is actually perfect, and the two will compliment each other completely. Both Val and Hernandez are genial and personable, with infectious smiles and engaging personalities. You could almost forget that respectively, they are among the best at what they do. Originally, I thought that Amber Rose and Maksim Chmerkovskiy were a shoe-in to win this competition, but now I'm not so sure. Maks' brother Val is every bit the dancer he is, and Hernandez has got a physical prowess that simply can't be ignored.

That being said, I'll be interested to see what the pair of them look like with 12 inches of dead air between the top of her head and the top of his. Val has a unique ability to transform anyone dancing with him into 10 times the dancer they'd be otherwise. With someone already as impressive as Hernandez, we could have another Meryl Davis on our hands.