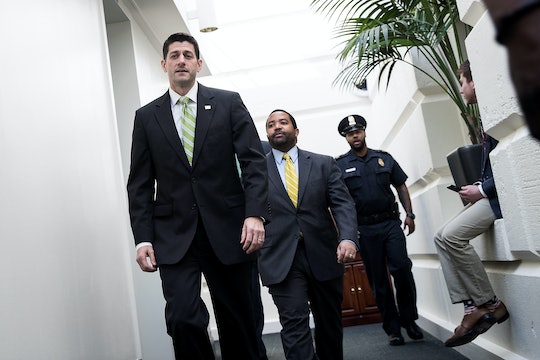 How The AHCA Being Killed Will Affect Families

As if current United States politics couldn't get any crazier, Republican leaders in the House and Senate have pulled their Obamacare replacement plan, the American Health Care Act, Friday afternoon. After days of debates, thousands of phone calls to Congressmen, and a bleary Paul Ryan informing President Donald Trump that the bill did not have enough votes to pass, the bill has officially been killed. And as this may seem like a huge victory for those opposed to the legislation. Here's exactly how the AHCA being killed will affect families.

In short, families will get to keep their coverage under the Affordable Care Act, and Obamacare has been a crucial source of health care for American families everywhere. Obamacare provides families with tax credits in order to help them pay their insurance premiums, which has helped to insure millions of previously uninsured American families. The ACA has also defined maternity leave as an essential benefit, and covers at least one form of birth control per person.

So yes, this latest development is a victory for millions of Americans, but especially American families. The Republican bill they proposed to replace Obamacare would not only cut funding to Planned Parenthood for at least a year, but would also gut funding to Medicaid, a major form of assistance to families everywhere.

Here's more on how keeping Obamacare in place is a positive development for families across the United States:

With the Affordable Care Act, maternity care for mothers is literally a requirement for insurers to provide. Known as an "essential benefit," maternity care is part of every health insurance plan through Obamacare.

On the other hand, the AHCA would leave such provisions on rougher terrain. As late as yesterday, reports alleged that Republican lawmakers were considering pulling maternity coverage, as well as other female preventative care, from the new bill. Luckily, the bill has been pulled, and, for now, families are safe.

Through the ACA, birth control was also an essential benefit for providers to give to their customers. And though many conservatives may have touted birth control as unnecessary, families everywhere may depend upon contraceptives in order to keep their family planning on track. With Planned Parenthood and female-friendly insurance plans, families have been extremely well-protected through Obamacare.

However, the ACHA would have done away with all of that, pulling funding from Planned Parenthood to gutting Medicaid, possibly forcing families to have to pay for birth control out of pocket, with no assistance.

With the ACA, families are able to receive tax credits when they purchase an insurance plan through the health care marketplace. The credits are based on age, income, and location (some states have higher premiums than others). So, families who didn't have employer-provided insurance have basically been able to get reimbursed for the cost of their insurance, to some extent.

But, the Republican's plan looked at tax credits a little differently. Tax credits in the AHCA weren't based on income, and insurers would actually be allowed to charge older citizens more for insurance. So, again, the AHCA being killed is indeed a positive outcome of the week's happenings.