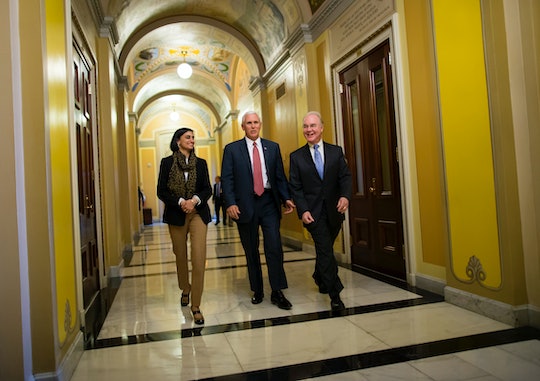 As the Republicans celebrate their victory in passing the American Health Care Act in the House of Representatives, today, many Americans are now at a greater risk of losing their health insurance. The Republican health care bill to replace Obamacare has had a rough journey, initially failing its first time around. However, in an attempt to please more hard-line conservatives, the GOP's latest version of the AHCA has increased measures that could harm millions of Americans. Specifically, Americans who aren't straight, white men. So, just how does the AHCA hurt transgender kids? The answer is complicated, and also troubling.

While the bill still has to pass in the Senate, the repercussions of its potential passage still deserve to be analyzed. For starters, the AHCA seeks to defund Planned Parenthood, a clinic that serves the needs of many trans people across the United States. In fact, "65 Planned Parenthood locations now offer transition-related medical care," according to The Daily Beast, and that's just the start of how the AHCA impacts trans Americans, especially trans children.

While Obamacare restricted insurance providers from denying coverage to trans Americans and children, the AHCA does no such thing, meaning thousands of Americans could potentially lose coverage, just for being themselves.

As the AHCA strips away protection for Americans with pre-existing conditions, it also does away with many mandates that require states to cover conditions. Unfortunately, even under Obamacare, many transgender Americans were not able to receive coverage. According to the 2015 U.S. Transgender Survey Complete Report,

One-third (33%) of those who saw a health care provider had at least one negative experience related to being transgender, such as being verbally harassed or refused treatment because of their gender identity.

And while this information is horrible, it's only worse for transgender kids. The Trump administration has already taken away rights from the youngest in the trans community, revoking an Obama-era mandate that allowed them to use the bathroom that matched their gender identity at school.

Basically, under the AHCA, anyone with a pre-existing condition — such as being trans, being a sexual assault victim, having a C-section, and more — is in danger of losing their coverage. While Republicans claim to want to protect all Americans, their new bill will do more harm than good. Not only does it target women, but it targets all trans Americans, including children.

Fortunately, it still has to pass in the Senate for it to become law. But it could still happen, and that means millions of Americans would be at risk.

More Like This
What Is Monkeypox & Should You Be Worried? Here’s What You Need To Know
Two Young Children Have Been Hospitalized Because Their Formula Is Out Of Stock
Spain Could Offer Up To 5 Days Of Menstrual Leave A Month & It'd Be A Game Changer
From Captions To Gifts, These Are All The Kindergarten Graduation Ideas You Need