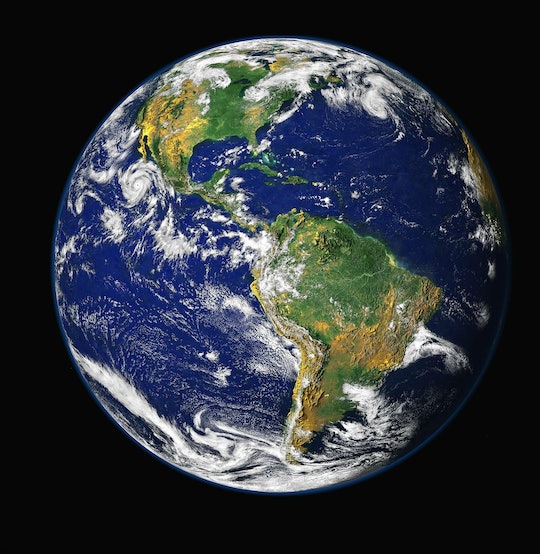 The Paris Climate Agreement: Boon Or Bust For Families?

Citing anonymous sources Wednesday, several news outlets, including CNN and The New York Times, reported that President Donald Trump is leaning toward reversing the United States' commitment to reducing greenhouse gas emissions. The 2015 Paris climate agreement is a collaborative effort with most of the rest of the world to save the planet, but Trump's reported determination to pull out is no surprise. He called climate change a "hoax" on the campaign trail and stirred global consternation last week when he did not join other major world leaders in signing a statement of support for the agreement. The new president has insisted that he opposes the deal because he believes it hurts the American economy and therefore citizens, but evidence suggests that the Paris climate accord helps families in the long run.

The wellbeing of families, of course, is a major indicator of the strength or weakness of the economy as a whole, with their rise to the middle class or stagnation in poverty reflecting growth or problems. So, it stands to reason that Trump believes that he will help families by backing out of his predecessor President Barack Obama's previous pledge to reduce the country's carbon emissions by 26 to 28 percent from 2005 levels by 2025. In fact, forsaking the promise made to the more than 190 countries that also signed on to do their part to fight back against global warming could very well place many American families in a precarious position moving forward.

And that's not just true because of the long-term, potentially calamitous effects of global warming, like an increase in floods and droughts, the spread of diseases like malaria, and the diminishment of freshwater availability over the next century. If Trump continues the work he has already started in unwinding Obama's efforts to fight back against these and other avoidable, catastrophic outcomes, he also runs the risk of denying American workers and their families the opportunities that embracing clean energy has and likely will continue to provide.

One of Obama's signature strides toward accomplishing the United States' self-imposed Paris accords goal was the implementation of the Clean Power Plan, "which would have closed hundreds of coal-fired power plants, frozen construction of new plants and replaced them with vast new wind and solar farms," Coral Davenport and Alissa J. Rubin wrote for The New York Times. But Trump abolished that with an executive order in March, telling coal industry workers assembled as he did so "You’re going back to work."

The fact is, the coal industry peaked a long time ago, and is now on an undeniable downward trajectory that makes the prospect of a revival seem far-fetched. According to TIME, the emergence of natural gas as a cheaper alternative has dramatically slowed coal production, and renewable energy sources like solar and wind are besting coal in areas where they thrive. In 2017, solar jobs outnumber those dealing with coal at a ratio of two to one. As The New York Times put it, the jobs Trump is so intent on bringing back by jeopardizing the very planet don't even exist anymore.

On the other hand, green energy jobs like the ones that Obama's Clean Energy Plan promoted are the future. Climate Progress founding editor Joe Romm argued in a 2011 essay that they they'll be the only energy sector jobs left in years to come. He cited the statistic that clean energy jobs like those in wind and solar could support as many as 20 million jobs and trillions of dollars in revenue by 2030. According to The Guardian, these jobs include fun future careers for the world's current youngsters like living roof and wall gardener, clean car mechanic, and landfill miner.

So, any family hinging its livelihood on Trump's determination to bring back coal and to shun renewables will likely be sorely disappointed. On the flip side, investing not only in renewables but in a future workforce equipped to maintain grow those industries has the potential to set the country's children with more prosperous futures.

Finally, Trump's insistence that the Paris climate accord hurts the economy is dubious at best, as hundreds of major U.S. corporations have voiced their support for sticking with the agreement, which calls for each participating country to set its own greenhouse-gas reduction goal, according to CNN. Giants like ExxonMobil, Chevron, Adidas, Google, Tesla, Johnson & Johnson, and many more support the deal, with the general consensus being that it won't negatively impact American businesses' ability to compete, but that it will help to create new jobs and ensure that the country will be well-positioned to negotiate on the world stage.

Clearly, the best path forward for America's families is the most economically stable one — and coal is not the answer. Rather, embracing the renewables that will both provide jobs and help to reduce harm to the planet as a whole provides an important pathway we would be wise to follow.

Acknowledging this reality sooner rather than later is a key part of doing everything possible to pass on a safe and sustainable earth to generations to come, as well as positioning families for economic success.

And that means keeping the promise of the Paris climate accord.