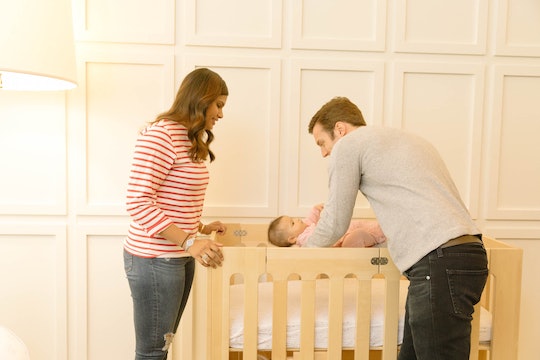 How The Pick Up, Put Down Method Changes Your Baby's Brain

For parents who find Cry It Out a bit too extreme, there is a gentler sleep training method to consider trying: the Pick Up, Put Down method. This technique has gained a lot of popularity over the years for it's effectiveness and gentleness. As with any sleep training method, however, you're likely to wonder how the Pick Up, Put Down method changes your baby's brain. After all, the last think you want to do is try something that could damage your baby for life.

According to Healthline, the Pick Up, Put Down method is a form of sleep training that was originally made popular by Tracy Hogg in her book, Secrets of the Baby Whisperer: How to Calm, Connect, and Communicate with your Baby. The method is considered the "middle ground" of training because it allows parents to teach their children to dependently fall asleep without resorting to letting them cry or feeling abandoned, as many parents fear. This method, however, could take a lot more patience than some of the other sleep training routes because it does require you to be present and work with your baby through the process.

In order to utilize this method, the aforementioned Healthline article shared that you go through a normal bedtime routine and put your baby down they're tired but not yet asleep (which is key). If they don't cry, leave the room, but stay nearby to wait and listen. If your baby starts to cry, be sure they're not just fussing first, then go in and pick them up to soothe them. Once your little one settles back down but is still awake, start the process over.

As you can see, the method can take a lot of back-and-forth and soothing before your baby finally falls asleep. So, the difference in this method's effect on the brain comes in when parents are reassuring their child that they're still there while not letting them rely on the parent to fall asleep.

Several parents are against the cry-it-out method because they're worried of the way it will make their baby feel. According to Psychology Today, modern neuroscience has confirmed that letting babies get distressed is a practice that may damage children and their relational capacities long term. The site added that giving babies what they need can lead to greater independence later, which is one way the Pick Up, Put Down method can positively affect your baby's brain.

Additionally, Belly Belly shared a baby's brain is extremely vulnerable to stress because cells are still moving where they need to be (migration) for the first year of life. Migration is hugely influenced by uncomforted stress. By using a method like Pick Up, Put Down neurons link together into circuits controlling learning, memory, and social behavior, according to Science News, and in turn, the method affects where neurons end up and the connections they form. As a result of the responsive method of Pick Up, Put Down researchers, observed social behavioral brain activity is stronger for kids who receive comfort and interaction from their parents, according to HuffPost. In other words, babies who are part of this sleep method are more likely to understand others or try to see things through other people's eyes. Primarily because of the neuron activity that occurs when a baby's met with reassurance and attention during the Pick Up, Put Down method.

But it's not a perfect method.According to Wee Bee Dreaming, the Pick Up, Put Down method only works best with babies under 6 months, and this is because it trains a baby's brain to help them self soothe (in a gentle way). If your child is older than 6 months, it can have the opposite effect and seem confusing or stimulating instead.

So, provided you practice within the rules, the Pick Up, Put Down method will only benefit your baby's brain in the long run.