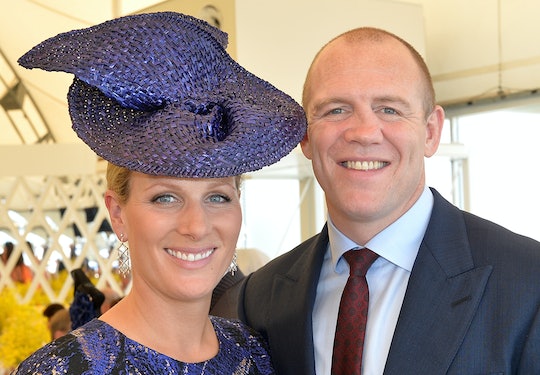 Earlier this year, the Queen's granddaughter, Zara Tindall welcomed her second daughter, Lena, into the world with her husband, Mike, but it hadn't exactly been an easy road to becoming a family of four. In September, Zara revealed that she'd actually had two miscarriages, the first occurring just before Christmas in 2016, after they'd already announced her pregnancy with the world. Yet understandably heartbreaking as that would have been, it actually ended up inadvertently offering the couple a special Christmas Day bonding moment with the Queen. Here's how the Queen supported Zara and Mike Tindall after their miscarriage, according to The Express, because even though they're royals, they are still just a normal family trying to help each other through.

In a recent interview with House of Rugby, Mike — a former professional rugby player — spoke about what it's like to spend Christmas with the royals at Sandringham, and revealed that following the loss of their baby in 2016 (the couple's rep released a statement announcing the miscarriage on Christmas Eve at the time, according to The Mirror), he and Zara opted out of the family's traditional Christmas morning walk to church, which always draws a crowd of royal fans and news photographers. Also not in the mood for church that year though? Her Majesty herself, who had been feeling under the weather.

Mike explained that the three of them ended up staying home, and "did [their] own little private [Christmas morning] just as a three." The Queen's unexpected attendance did give Mike a bit of pause though: he revealed during the interview that he'd actually chosen to wear a bright, Christmas-themed suit in an attempt to keep things light for his wife's benefit, but when he realized the monarch would be joining them, he became a bit concerned he may have not made the best sartorial decision. Mike said, "I had a suit on like this, and I was like, 'maybe I should be wearing something a little bit different today,' but I was trying to raise the mood."

It turns out though, that the Queen didn't mind his choice of attire at all. Mike explained, "The Queen loves bright colors, that's why she wears all the amazing colors that she does wear." And given that the Queen also "thinks dark colors are for sad times," according to Mike, the fact that he'd shown up in a festive suit actually really did help raise the mood as he'd intended.

As much as he and Zara likely weren't expecting to spend Christmas Day alone with the Queen — and they really *were* alone, since the Queen gives all of her staff the day off, according to Travel + Leisure — it sounds like it was a pretty meaningful experience for them during an otherwise incredibly hard time.

In May, Mike spoke to The Telegraph about the miscarriage, and explained that they'd learned the "devastating" news at their five-month ultrasound, and said they'd struggled with guilt over the loss. He said, "You look at yourself and ask: Was it our fault? Was it something we did? I like to think that it happened for a reason, perhaps something wasn’t right, otherwise it could eat you up from inside."

And in a separate interview with The Sunday Times in July, Zara admitted that having to publicly announce their loss was one of the hardest parts about the whole ordeal. She said, "the worst bit was that we had to tell everyone — everyone knew."

Even without the added stress of experiencing a miscarriage though, Mike admitted that spending Christmas with the royal is "quite strange," and told House of Rugby that it is very different from what he was used to growing up. And though the family does seem very close, dealing with such a personal loss at the very formal royal Sandringham Christmas must at least be a bit awkward.

From the sounds of it though, Mike and Zara's 2016 Christmas was actually quite private and intimate, and likely a special time they won't forget. Though the Queen may not always be thought of as the most warm and fuzzy woman — she *is* the Queen after all — the notion of her spending the morning with her grieving granddaughter and her husband is quite touching, and a testament to the fact that, as public as their lives may be, they are still very much there for one another in private.