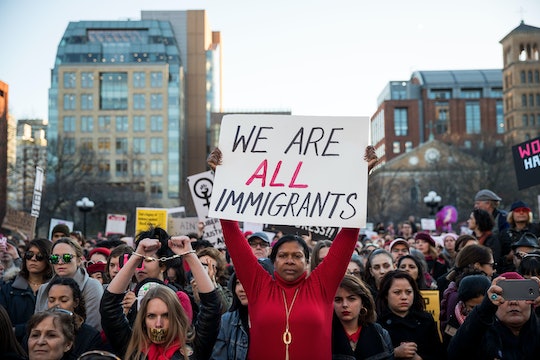 Part of the Trump administration's new immigration policy is to push back on alleged "sanctuary cities," or jurisdictions that help immigrants by not disclosing anyone's immigration status to Immigration and Customs Enforcement requests. On Monday, Attorney General Jeff Sessions sent a strong warning to any locality that's sympathetic to undocumented immigrants, pledging to withdraw federal grant money from the Justice Department from any city that refuses to comply. If successful, Trump's sanctuary city crackdown could hurt immigrant families in a few ways.

The Justice Department is slated to give away $4.1 billion in federal grants this fiscal year, but Sessions presented Americans with a list of some 200 jurisdictions compiled by the Department of Homeland Security that call themselves sanctuary cities and threatened to withhold those dollars. Sessions said:

I strongly urge our nation's states and cities and counties to consider carefully the harm they are doing to their citizens by refusing to enforce our immigration laws and to rethink these policies. Such policies make their cities and states less safe — public safety as well as national security are at stake — and put them at risk of losing federal dollars.

In addition to withholding funds, Sessions said that the Justice Department will also require cities and states to certify that that they've complied with ICE to receive any grants from his department.

Immigrant families could be in danger of getting split up if cities cave to the financial pressure of the grants and begin handing out names and personal information of undocumented immigrants who could be deported. But there are other ways immigrant families will suffer.

If sanctuary cities take a stand, they could theoretically risk losing those aforementioned Justice Department grants (although it is still unclear if Sessions can force jurisdictions to comply with the federal agencies this way). Grant funding often goes to municipal services, like housing programs, funding local fire and police departments, and other education and community outreach initiatives. So immigrant families who depend or use any of those programs — like taking a free language class at the township hall or using affordable childcare — will feel the effects of Trump's immigration policies either way.

Since Trump's executive order ramping up deportations in January, there have also been reports of immigrant families being scared to enroll in benefit programs for low income families. The fear stoked by Session's remarks on Monday could actually be very dangerous if someone doesn't receive the medical attention they need or are not getting any assistance when it comes to putting food on the table. In other words, Sessions' perceived threat to sanctuary cities could have tangible effects on immigrant families immediately.

Fortunately for the residents of these jurisdictions, most sanctuary cities have pledged to stand up to the Trump administration's anti-immigration initiatives and it looks like it will be a tough legal battle for the federal government to force states and cities to comply with its orders. For now, immigrant families are safe, but there's good reason to be concerned about the future of their communities in the long haul.