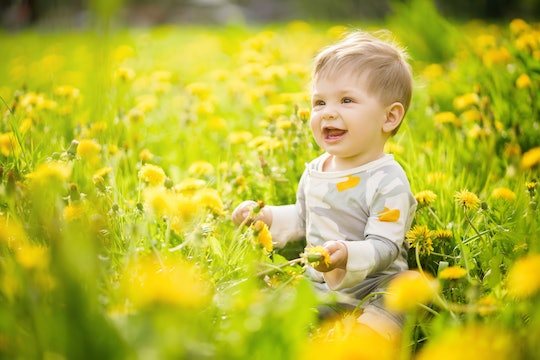 How The Summer Solstice Affects Your Baby's Sleep, Because The Day Feels Forever Long

We are rapidly approaching the longest day of the year. On June 21 at 6:07 a.m., the Northern Hemisphere will be hitting its summer solstice. It's a time that echoes the distant history of folklore and mythology, of standing stones and rituals I'm choosing to believe were less painful than they probably were. However, it's also just the longest day, which, supernatural or not, could have an effect on your body. And what about your kids? I think we all need to know how the summer solstice affects your baby's sleep, because it's a precious commodity when you have a little one.

While there is significant lore and mythos surrounding the days and long evenings of summer solstice, most parents of newborns aren't worried about whether they'll be prepared for the sexy fertility rituals that dominate the history of the day. What they are worried about is how the extended sunlight on that long summer night could affect their baby's circadian sleep cycle and place the house in turmoil. According to The Journal of Sleep Research, they may have a right to be worried. Think about it, when the days are shorter, it feels natural to curl up on the lounge and get cozy before bed. However, long summer days make even us as adults long to stay outside and active. The journal wrote that "light is an important factor in the control of melatonin secretion and the maintenance of sleep–wake cycles in older adults. There is limited evidence to suggest the same might be true for very young babies."

With my kids, the summer was actually their best time for sleep. While it's not easy as a parent to come inside and put your children to bed when it's so beautiful outside, it was utterly necessary for my sanity. We'd stay out during the day, or at least in my sunny living room, and then I'd put them down in their cool, black-as-night rooms. I used blackout curtains so strong they could've protected a vampire. According to the experts in the sleeping guide Precious Little Sleep, this is the ideal solution. According to them, the long nights shouldn't be a problem if you keep the room where they sleep cool and dark, and keep up your regular routine. Obviously, if you're taking your child to party at an all-night shindig with bonfires and marathons of Outlander being shown on a huge outdoor screen, you might get tripped up. Otherwise, you should be OK.

According to research in Environmental Neonatology, the sun, or at least the access to bright light, encourages a baby's sleep patterns to become regular. It cements the base of their circadian rhythm, which is the pattern of sleep that is dependent upon light and dark. Humans are not nocturnal creatures in spite of how you might have tried to be in college. We're designed to be up with the sun, and down with the moon. It's just that babies aren't quite ready for the long days of summer, so parents need to adjust the light by artificial means.

As for the magic? That's another story. Just for fun I spoke to Melanie Reid, a self-described Pagan/Wiccan and tarot card reader from Coney Island, New York, and asked her how summer solstice affects your baby's sleep, if at all. "Babies are very attuned to charges and changes in the atmosphere, and summer solstice is full of electrical energy and good feelings," she says. "The key is to just be chill with them. Channel all that good energy towards them in your mind — only concentrate on sleep. Kids are very receptive to their parents' energies." I mean, I can get behind that. Whatever works, just get the good blackout curtains for your baby's room first.