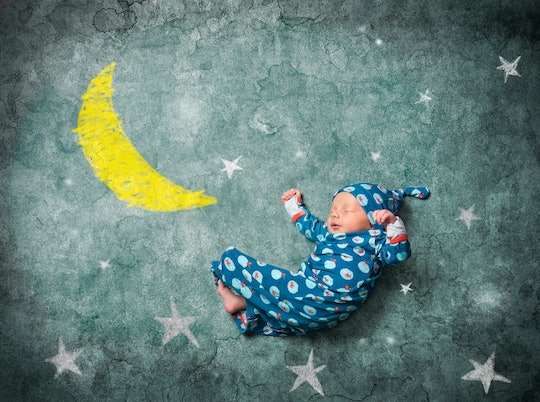 Here's How Your Baby Will Fare During The Supermoon

Most can recall those brightly-lit nights when the moon appears especially warm and ripe. The moon's inflated size is an optical illusion, the visual effect of lunar perigree, or the point when the moon's orbit brings it closest to the earth. For centuries, the phenomenon has inspired astrologers and folklorists to ask what the bigger, brighter moon means for us. Stories of how the supermoon affects your baby are rooted in ancient myths, and the mystical intuition that the moon exerts a powerful force on human behavior.

According to EarthSky, the western hemisphere will witness the most impressive supermoon of the year on Jan. 1, 2018 — New Year's Day. "When the moon is closest to the Earth, its gravitational pull is at its peak," wrote Larry Sessions. It's not crazy to wonder how such a moon might impact a baby, and The Baby Sleep Site asked its readers to share their stories. One parent reported that her child had night terrors during a full moon, and others felt that the brighter evenings kept their babies awake.

As TIME pointed out, the moon's journey around the earth is linked to women's menstrual cycles, and people suffering from epilepsy are more likely to have seizures during a full moon. (A supermoon is essentially a new or full moon hovering close to Earth.) Researchers at the University of Basel found that people slept 20 minutes less, on average, in the nights surrounding the full moon, reported TIME. Additionally, their melatonin levels were lower, and the subjects slept less deeply.

This is ominous news for parents of babies, who need all the sleep they can get. It's important to note, however, that the lessened sleep might not be the result of anything magical: babies are very sensitive to light. I wouldn't be surprised if a baby slept more restlessly during a supermoon, for no other reason than the fact that infants are naturally sensitive to change.

While there's little research out there about the specific effects of supermoons on babies, a study conducted by the Children's Hospital of Eastern Ontario Research Institute looked into full moons and sleep for children aged 8 to 11. This study too found a weak correlation between slightly shortened sleep and a full moon. The Weather Channel, reporting on the study, noted that the loss of sleep for kids was probably the result of a brighter sky, and not any gravitational pull or lunar magic. In the last few decades, high-quality research has consistently disproven the folkloric link between moons and human behavior, despite the persistent myth that wild things come out when the moon is full.

In Native American mythology, a full moon in January is known as a Wolf Moon, according to Conscious Reminder. The astrological site also pointed on that Monday's supermoon is 11 degrees at Cancer — one of the twelve astrological signs — and opposed by Venus, symbolic of partnership love. For the astrologically inclined, what does that mean for you? "[The supermoon] will open the emotional floodgates ... inspiring deep feelings of love and tenderness," wrote Conscious Reminder. For parents and their babies, a wellspring of loving feelings can only be an auspicious way to start the New Year.

While science finds no connection between the moons and human daily life, astrology imbues every aspect of the sky with meaning. Whether or not your baby sleeps a few minutes less under the New Year's Day supermoon, parents can choose to interpret its beauty as a symbol of the deep love that binds them and their babies. They won't be so young and sweet forever, so why not cherish every full moon — super or otherwise — when it shines?

More Like This
Here’s What You Need To Know About That Viral 1960s Baby Formula “Recipe”
The 40 Best Toys For 6-Month-Old Babies
The Best Apps For Selling Used Baby Gear
Abbot's Formula-Producing Plant Can Reopen In As Early As 2 Weeks — Now What?