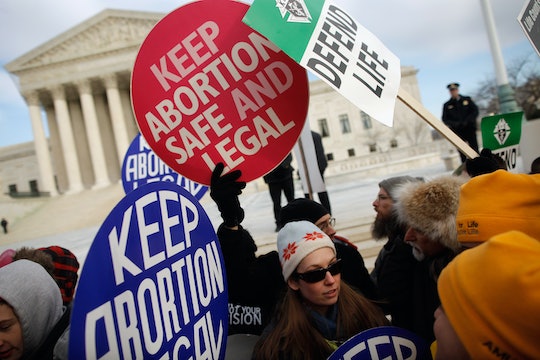 Although abortion rights have been under attack for decades, conservative lawmakers have worked hard in recent years to completely undo the right to choose. On Tuesday, NARAL Pro-Choice America released its annual 50-state report outlining the severity of anti-choice efforts to dismantle access to reproductive healthcare in the United States. The report paints a grim picture — one NARAL expects to darken in the next four years. It also goes to show how the Trump administration will have a unique impact on young people seeking abortions.

As of this year, 44 states have parental-notice or -consent legislation on the books that requires young people seeking abortions to notify at least one parent 24 to 48 hours before a scheduled procedure, according to the NARAL report. Notification laws already restrict a minor's access to reproductive healthcare by mandating guardian involvement, which can actually cause a young person harm for a number of reasons. But NARAL and other reproductive rights organizations fear the tightening of these laws will only serve to further endanger the welfare of adults and young people seeking abortions — especially if Roe v. Wade, the landmark decision that secured the right to abortion 44 years ago this Sunday, is invalidated.

In a statement upon the report's release, NARAL President Ilyse Hogue said, "If Donald Trump succeeds in appointing Supreme Court justices who overturn Roe v. Wade, our data shows that women will be even worse off."

Fourteen states only require young people to notify one parent, while 25 states — including blue havens like California and Massachusetts — mandate parental consent. Only five states — Oklahoma, Texas, Utah, Virginia, and Wyoming — mandate that minors both notify their parents and receive consent. Those regions are among the 26 states with the most restrictive access to reproductive healthcare, according to NARAL.

In Texas, for example, not only does a teenager need parental consent for an abortion, they also have to get parental permission to obtain a birth control prescription. Sharmeen Aly, communications coordinator for NARAL Pro-Choice Texas, tells Romper:

This leaves teens who don’t have supportive relationships with their parents to navigate complicated regulations in order to access preventative care.

According to Advocates for Youth, teenage women made up less than 17 percent of all abortions that were performed during 2007. Yet Republicans continue to introduce and pass laws that inhibit a young person's access to legal abortion. Forcing a teenager to involve a parent in their decision to get an abortion undermines their welfare, particularly if the young person comes from an unsafe household. As noted by Advocates for Youth, 30 percent of youth who did not inform their parents about their abortions "feared violence or being forced to leave home" if they disclosed their decision.

More so, having to notify a parent means delaying the procedure. Teens facing an unintended pregnancy who cannot turn to their parents may travel to a state without notification laws or may perform a self-induced abortion at home. And research shows that both options carry risks to the teenager's heath, including long-term complications that could have been avoided if they had unrestricted access to abortion in their state.

Multiple medical organizations, including the Center for Adolescent Health & the Law, have spoken out against these mandatory notification laws. These laws, the health groups say, only harm a young person's reproductive healthcare because they limit their access to the services they need. Under a Trump administration, this is only bound to get worse.