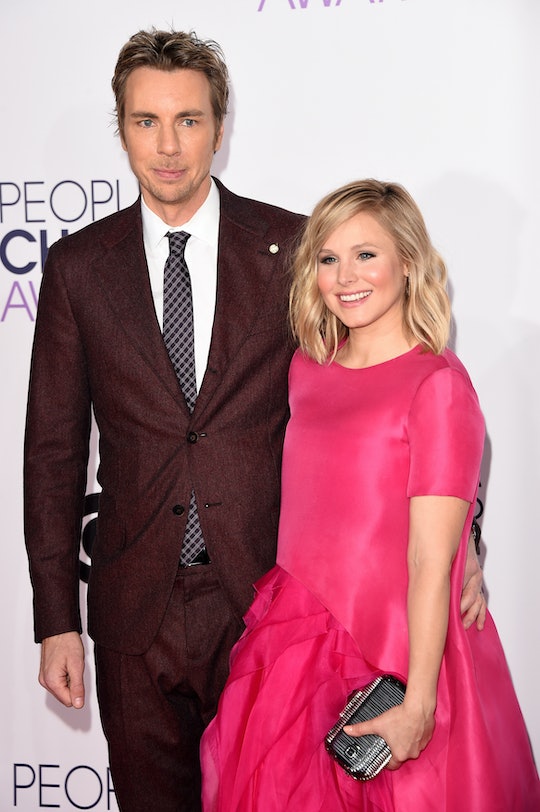 The end of the year is such an interesting and trying time for parenting. Between gifts, holidays, families, and folklore, there's a lot to juggle and a lot to learn to manage when you have kids. However, to offer up some inspiration, here's how these celebs teach their kids about Santa, because there's no wrong way to do it.

Whether you're a firm believer in standing by the whole "you have to believe" approach and would never breech the sacred, worldwide covenant and reveal Santa's secrets, or you prefer a more honest, relatable approach to telling your kids what's up about the old guy sneaking in through the chimney to leave them gifts thing, there are so many ways to approach your children's endless questions when they start asking about how any of the aforementioned issues would be logistically possible.

Perhaps you could do it like Dax Shepherd and Kristen Bell, who, according to recent reports, refuse to lie... like, at all. A few weeks ago, Us Weekly reported that the couple told their kids Santa was "just pretend," because it made it more sense to be honest with them when they started making poignant inquiries into the not-so-air-tight logic of it all.

"This is going to be very controversial," Shepard told the magazine on Dec. 3, at the Children’s Hospital of Los Angeles. "I have a fundamental rule that I will never lie to them, which is challenging at times. Our 5-year-old started asking questions like, 'Well, this doesn’t make sense, and that doesn’t make sense.' I’m like, 'You know what? This is just a fun thing we pretend while it’s Christmas.'"

He continued: “They love watching movies about Santa, they love talking about Santa... They don’t think he exists, but they’re super happy and everything’s fine.”

However, many other celeb families approach the holidays in different ways, as some believe in emphasizing other values, like thankfulness. For example, Jennifer Garner told Us Weekly that her holiday traditions involve making a gratitude tree as well as a traditional evergreen. "I always make a gratitude tree and hang it up and then we make leaves and write things that we're grateful for on them every day of November," she said.

Tori Spelling's family firmly believes in preserving the concept of Santa... and in fact, Spelling also told Us Weekly in a separate interview back in 2011 that one of the holiday traditions she looks forward to most is actually bringing her kids to have their photos taken with St. Nick.

"We're definitely going to hang with friends and family," Spelling said. "We love the holidays, so we're excited to celebrate Hattie's first Christmas. We're excited to have our Santa Claus pictures with all three of them. Stella's already picked out matching outfits for her and Hattie. We love to cook and bake a lot. We'll be decorating the whole house so that'll be a lot of fun."

All in all, it's clear that there's definitely no one way to approach the holiday season, whether you want to 'fess up about the mythology of it all, or keep your kids looking to the sky for a sleigh for just a few more years. Either way, the reality is that the holidays are about family, food, togetherness, and gratitude, and however you go about celebrating them is what's best for you.

More Like This
15 Elf On The Shelf Ideas That Involve The Family Pet
18 Holiday Gift Ideas Perfect For Your In-Laws
20 Secret Santa Gifts Under $5 That Won’t Disappoint
How Does Elf On The Shelf Work? A Simple Guide For Parents