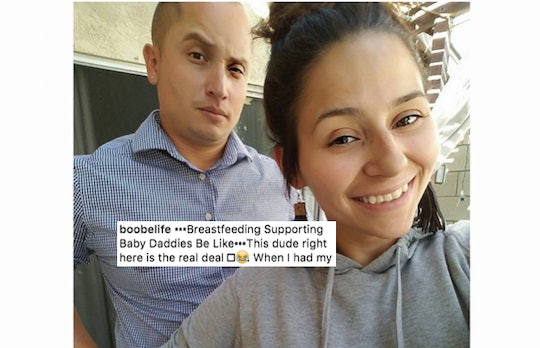 This Dad Supported His Breastfeeding Partner In The Sweetest & Silliest Way

Breastfeeding isn't always easy and each woman's experience with it is different. But sometimes, a little bit of encouragement and humor can make all the difference. Case in point: this dad who supported his breastfeeding partner by doing something very interesting to his shirt is a perfect example of how to help nursing moms feel more at ease. Since breastfeeding comes with so many side effects — and they aren't all pleasant — one dad decided to cheer up his partner, and the photo of the result is seriously hilarious.

Chris Lopez, a mother of two from Chino, California, is a huge proponent of breastfeeding and has even created her own Instagram page to show her support and advocacy. And she isn't alone in her dedication. Lopez's partner Cee Grant, whom she shares her 3-year-old son and 11-month-old daughter with, has also been a huge support system for the family. And it was Grant who decided to lighten the mood a little one day, when he decided to give himself a breastfeeding stain on his shirt, just like the one Lopez had.

Lopez couldn't let the moment go unnoticed or unappreciated, so she decided to snap a photo of the sweet moment. The post has since gone viral, with over 5,000 likes and hundreds of supportive comments on Facebook.

"This dude right here is the real deal," Lopez began the caption of the photo first posted on Instagram. "When I had my son I couldn't breastfeed more than 4 months. I was extremely insecure to nurse in public. I felt very alone and didn't have much of his support as he was going through his own struggles in life."

She went on to explain that during her second pregnancy, she decided to let her partner know how hard her first attempts at breastfeeding had been, writing:

I needed his support and encouragement and for him not to let me give up when I wanted to. He didn't realize how much I needed his support until I actually opened my mouth and expressed it to him and boy has he come through ... From 1 a.m. trips to Walgreens for nipple shields to scrubbing gentian Violet off the bathroom counter, he has done things so much differently for me this time around and it has helped me succeed in so many ways.

Speaking to Romper, Lopez also explained how Grant grew up in the foster system, and that he "never knew what it was to be a good father," so her realization that she should communicate her needs with him was truly groundbreaking. "Once I learned to do that he was there for me as much as I needed him and it made all the difference," she said.

As for what exactly went down the day Grant altered his shirt for her, Lopez told Romper:

We were out with the kids and as soon as I saw him dabbing his nipple I looked down and realized I had leaked, and instead of feeling embarrassed I immediately busted out laughing.

How awesome is that? The fact of the matter is, leakage from breasts while pregnant, soon after having a baby, or breastfeeding is totally normal. More so, according to BabyCenter.com, "Leaking breasts are a reminder that lactation is going well. It's also the body's way of preventing engorgement and relieving that feeling of fullness nursing moms get in their breasts."

And as Lopez told Romper, breastfeeding isn't all sunshine and rainbows. As she said, having "someone that won't let you give up and will have your back in those challenging or sometimes humiliating moments is vital."

Breastfeeding is natural, and so are the "embarrassing" moments that come with it. So really, there's nothing to feel self-conscious about. And Lopez and Grant's photo, while hilarious, serves as an important reminder of this and helps squash any stigmas still surrounding breastfeeding.