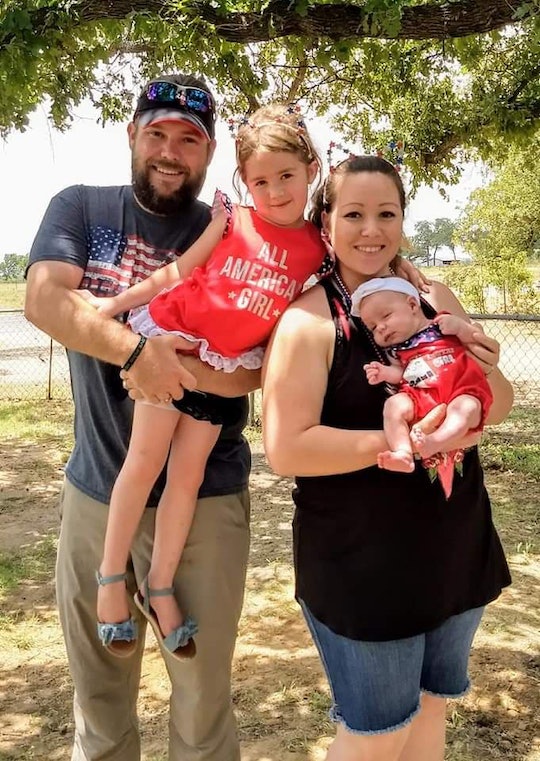 Husbands, pay attention. While it might be hard to understand a new mother's woes without knowing what an average mom's night-with-a-newborn looks like, here's a little something that can help. A Texas mom explained why she's so tired to her husband and it's pure genius. She took paper to pen and literally spelled it (or rather drew it) out for him.

After another sleepless night, Mattea Goff was at a loss for words to adequately describe to her husband why she was so, so tired after a seemingly full night of sleep. The result is pure hilarity, and with 55k comments and nearly 200k shares, it certainly struck a cord.

"So this past weekend I was having a hard time finding the words (probably because I haven't had any sleep) to express to Kris why I'm not in the best of moods first thing in the morning. So I sat down with my coffee and drew him a visual," Goff said in her post.

In a series of five drawings, Goff sums up a typical night with the end result being a battered and bewildered mom and a refreshed and ready-to-go husband.

Romper was able to ask Goff a few questions about her viral drawings, and she shed a little light on her backstory.

What was your husband's initial reaction to the drawings when you showed him, vs his reaction to all the attention its been getting.

This is not the first of my creations my husband has received, so his initial reaction was humorous but, nothing outstanding. His reaction to how it's gone viral has been extremely supportive.

How has your breastfeeding journey been thus far?

I nursed my first daughter until she was about two and it was challenging the entire time, now with my second one it's quite a bit easier, although it comes with all of the normal challenges like the comic depicts.

Do you always draw doodles like this and why do you think it's hit a cord with so many moms.

Yes, I've been doodling and drawing stuff for a long time I just never thought to post it! I think it's struck such a chord with moms (and dads) because it is something that's very relatable to just about anyone who has kids breast or bottle-fed a like.

You told Babble you might be starting a #uselessnipples page? Lol. Tell your fans a little more about this. Clearly they are very useless. Why do they even have them?!

I'm working on getting a Facebook page active within the next few days hopefully. wouldn't you know this would all happen at a very busy time According to a lot of guys that have commented, apparently their useless nipples are chest accessories. I guess they would look pretty weird without them.

Dozens of wives are tagging their husbands and the Facebook comments are pure gold.

"omggg!!! This is how I’m gonna have to start explaining things to you," Alex Balma said as she tagged her husband.

Others marveled at how much they could relate.

"This art work speaks to me on so many levels. So much passion," Keturah Gresham.

"This is me, every single night while I fume at Donnies snoring and his worthless nipples." — Joy Cuomo.

"So true. One more things needs to be added at the end. The woman gets up straight away when kids are up, get dressed and kids dressed while the blokes still in bed." — Jess Simpson.

The one thing that makes this post so great, is that it transcended the language barrier, with comments in French, Spanish and more. Mom struggles are universal!

Even with all the hype, Goff wanted to make sure one thing was clear — she's not blaming her husband in any way. She just wanted him to fully understand what she goes through every night.

"I think the majority of people got exactly what I was trying to convey, but, just to be clear I really wasn't trying to vilify the one person who is getting some sleep, my husband, aka Mr. Useless Nipples. Breastfeeding exclusively was my decision, and it's something my husband supports and greatly appreciates," Goff said.

She continued, saying that he's a very devoted, and involved father who can't be blamed for sleeping like a rock while she wakes up at the drop of a hat (as most mothers do).

"He's a very involved father in so many other ways. It's true that even the best of dads can step it up now and again and I may or may not fantasize about kicking him off the bed when he is able to sleep through most midnight adventures....Being a mom is seriously hard work, but so is being a good dad and I love and appreciate him for it," Goff said.

If there's one thing new moms know, besides the sleepless nights, it's that breastfeeding is hard. Not only is it a journey, but it requires devotion and of course some of those sleepless nights Goff describes.

In short, moms are the ultimate multitaskers. They are bakers, chefs, bankers, nurses, teachers, referees, and then some. Sometimes, it helps to just put it out there, no matter what the medium. And for Goff, art just happened to imitate life. Here's hoping she keeps her relatable drawings coming.