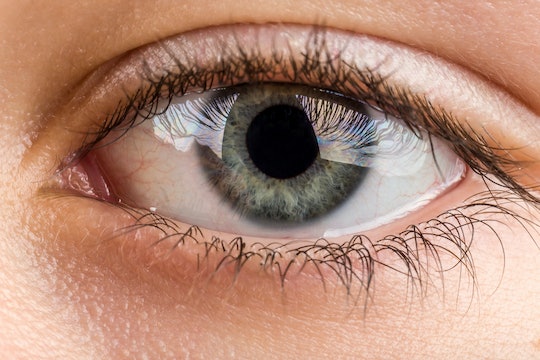 This Woman Thought She Had An Eyelash Stuck In Her Eye. Then It Moved.

I'm not a person who is easily icked out. As a kid, I collected bugs and thought I was going to be an entomologist and asked Santa Claus for ant farms and nets to catch bees. I'm still super curious about anything that flies and crawls, which might sound strange, but if you need someone to trap a spider in the kitchen, I'm your gal. But, this recent story about a woman who ended up with 14 worms being pulled from of her eye is seriously making me squirm.

Yup, everything about that sentence is entirely true and entirely foul. It's one of those stories that, despite its ick factor, is impossible to ignore since it just gets worse and worse right when it should get better. What's more, it could happen to anyone.

So here's what happened: Back in 2016, according to ABC News, a young woman named Abby Beckley was living on a cattle ranch in southern Oregon and felt like she had something in her eye. She told NPR, "You know how it feels when you have an eyelash in your eye? That's exactly how it felt, but when I looked in the mirror, I couldn't see anything."

The feeling just wouldn't go away, which was so infuriating that she eventually pulled up to a mirror and started trying to pluck whatever it was from the back of her eye socket. If you're a contact wearer like myself, you can probably relate hard to this.

When she pulled her eyelid down, she spotted the culprit! As she told NPR, it was a long, thin thing that she was able to yank out. Turns out, it was a worm.

Bah, are you OK? Can I keep going? You can take a minute because there's more where that came from. Actually, there were three more she pulled out before she took herself to a doctor at Oregon Health and Science University where, at first, they didn't believe her. We've all watched enough Grey's Anatomy to know that a patient like this gets a psych consult before someone cracks the case. Well, that's basically what happened. She recounted in the same NPR interview:

They couldn't find the worms. And they were saying things like, "A lot of people, when they have this claim, it's usually just mucus, but wouldn't it be fascinating if there was a worm?" I told them, "Just you wait."

But she advocated for herself and waited it out until she felt another one move. When the doctors looked, they couldn't believe it; they ended up removing 14 worms in total from her eyeball, as USA Today reported. So what the heck was it? This is the unbelievable part. Worms in eyes are not totally unheard of if you travel to some parts of the world, like the sub-Saharan African Onchocerca volvulus which infects about 37 million people, according to the World Health Organization.

But Beckley hadn't been in one of those areas so they took some samples and sent them off to the Centers for Disease Control and Prevention, where the Parasitic Diseases branch went to work, with Richard Bradbury leading the charge. At first they thought it was a species of eye worm that hadn't been seen since the 1930s, and literally infected only 10 people. (So you don't have them.)

But that wasn't it. This is where it gets worse, though. Remember when I said that Beckley had been living on a cattle ranch? Turns out, it was a cattle worm, which as Bradbury explained in an article in the American Journal of Tropical Medicine and Hygiene, parasites that live on a cow's eyes. There, they mate and have little baby worms which causes a pus to come out of the poor cow's eyes. A fly then comes along and drinks up the larvae, namely because the animal kingdom is really, really gross.

Since Beckley is not a farm animal, Bradbury concluded that a fly sipped up the cow's worm infected pus and then vomited it onto Beckley, where the larvae went to work and started making worms. So she didn't just have worms in her eyes, they were vomited there. "It's a living nightmare," she joked, according to NPR.

Luckily, the doctors were able to treat her so she doesn't have them anymore. But she should probably seek counseling because I would be scarred for life. Actually, I sort of already am. So just remember, that it's always OK to be wearing shades or tell flies to GTFO because you do not want one of those barfing on your eyeball.