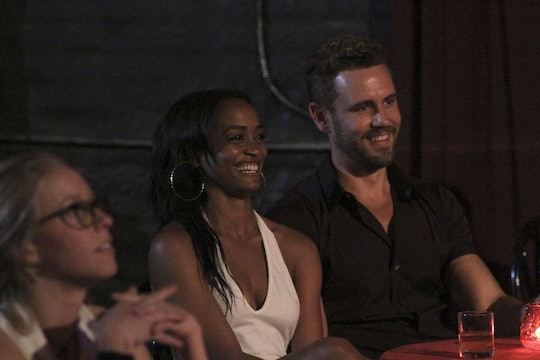 How To Apply To Rachel's 'Bachelorette' Season

The Bachelor and The Bachelorette franchise have made a habit out of announcing new Bachelor/ette reveals until shortly before the latest season of any given series is almost over, so that it doesn't spoil how the rest of the current storyline plays out. However, ABC is doing things a little differently this year in more ways than one. During Monday's night's Jimmy Kimmel Live!, it was revealed that the next Bachelorette will be none other than Rachel Lindsay, who is currently still a contender on Nick Viall's season (though apparently not for long). This has made many avid fans probably curious about how to apply to Rachel Lindsay's Bachelorette season, so that they can promptly win over her heart and appreciate her awesomeness in a way that Nick evidently couldn't.

While the TV show is making history by casting its very first black Bachelorette (which has arguably been a long time overdue), the way to go about applying seems to relatively be the same as always. Those interested in applying (or applying on someone else's behalf) can get the ball rolling in one of two different ways. Your first option is to mail in an application or nomination by downloading the form, filling it out, and sending it to the specified address along with recent photo. (Video submissions are also encouraged as well!)

Or, if you're kind of over the whole snail mail approach to things, you can fill out the form directly online (which seems way easier, honestly) and filling out all of the required information. Then, it's just a matter of waiting to see if you hear back about what the next step in the process is. (I have a feeling this is just one of many.)

Obviously, there are a ton of people that apply each season, so the odds of getting through can feel pretty slim, but hey, it's always worth a shot, so why not try and see what happens?! Plus, when you have someone as amazing as Rachel on the line, I think it's definitely worth taking a risk and seeing if you're one of the select few chosen to win over her heart.

Either way, I think we can all agree that it's going to prove to be an amazing season, not just because you'll be seeing history in the making (which is pretty cool), but also because Rachel is the best and deserves to find her happily ever after.