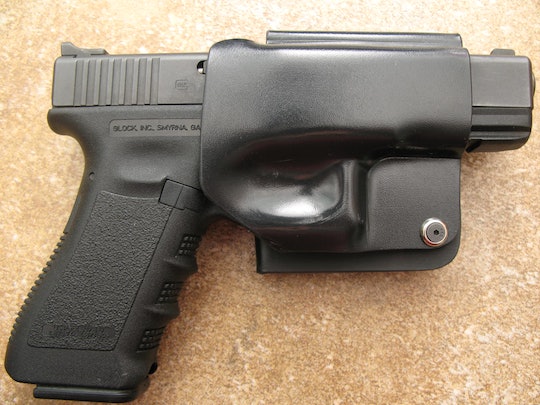 How to Argue Against Open Carry Gun Laws, Because Texas' Is Imminent

On Jan. 1, Texas will be the 45th state to pass legislation that allows its residents to carry firearms openly, but those who are against the new rule will want to know how to argue against open carry laws. Texas already allowed open carry of rifles and shotguns, but visible carrying of handguns has been banned since the Civil War. The state's impending open carry gun law will require the same regulations as current concealed carry conditions in order to gain a license: an age requirement of 21, clean criminal and psychological records, and passing a shooting test and training course.

Though the majority of states already allow open carry, Texas will become the biggest state to pass the law to date, according to ABC. California, Florida, New York, and Illinois — the other four states rounding out the top five most populous states in the U.S. — continue to ban the open carrying of firearms.

Not everyone in the Lone Star state is excited about the new legislation, including businesses such as grocery giant H-E-B as well a Walmart and a mall in Waco, Texas. Plenty of individuals are also against the legislation, but in a state that had over 800,000 gun owners in 2014, they may be outnumbered.

Nonetheless, if you live in Texas or another state with open carry laws and disagree with those statutes or live in a state where you worry about them becoming law, here's how to argue your anti-open-carry stance:

It Causes The "Weapons Effect"

Social psychologists have known for several decades that simply seeing weapons can make us more aggressive, a phenomenon known as "the weapons effect." Many studies have been conducted that show this effect, beginning with one in 1967 that documented that participants give higher electric shocks to people who have angered them when weapons (specifically a shotgun and a revolver) are in view (rather than a badminton and a racquetball). Drivers react more aggressively when a weapon is in view, a 1975 study found, honking more quickly and for longer periods of time. A 2006 study showed that armed drivers also tend to be more aggressive.

Fifty-seven other studies have produced similar findings, according to Psychology Today: quickly identifying dangerous threats — be it spiders or guns — and reacting with fight-or-flight behavior is an evolutionary advantage. When guns are in plain view, people are going to have the same reaction across society, whether it's advantageous or not — and you end up with a more aggressive society as a whole. Higher levels of aggression paired with access to guns does not sound like a recipe for a safer society.

Some argue that advertising the fact that one is armed will deter criminals from committing crimes. Is that really true, though? A 2013 John Hopkins study found that 10 percent of American police killed in the line of duty were shot with their own guns. These aren't ordinary citizens we're talking about; these are trained officers. If criminals are not deterred by gun-wielding cops, a regular person with a gun on his or her hip will probably not be a deterrent, either.

Furthermore, wearing guns where they're visible means, wearing them where a criminal could potentially steal and use them. "Open carry is unsafe, intimidating, and potentially dangerous," wrote Oklahoma State Senator Constance Johnston in a U.S. News op-ed. "Many first-time 'toters' will also be untrained in retaining control of their own weapons and may make it possible for others to grab their guns and use them against innocent bystanders."

The idea that we need to carry guns — openly or not — to deter violence doesn't seem to actually clue in to how guns are mainly used in the United States. Gun advocates seem to buy into a romanticized vision of a good guy stopping a mass shooting or defending his family from an intruder. When it comes down to it, though, this is very rarely the case.

A 2011 FBI report showed that just over 54 percent of firearm homicide victims knew their killers — and 24.8 percent of victims were murdered by family members. Putting guns in people's hands is simply not a statistically sound thing to do. LA Times journalist Scott Martelle crunched the numbers, and it comes down to this: In 2012, there were 259 "justifiable" homicides (i.e., cases of self-defense). This could be a good argument for guns and open carry — except in the same year, guns were used in 8,342 criminal homicides, 20,666 suicides, and 548 unintentional shootings.

Just let that sink in. There were over two times the amount of accidental gun deaths than cases of self-defense homicides. Your chances of using your gun for good are not in your favor — you are statistically more likely to have it stolen in a burglary or have it involved in an accidental death. How does making guns more accessible and visible seem like a good way to reduce that number?

In a 2010 press release by the San Mateo County Office, the Sheriff's Office explained the burden that open carry laws place on law enforcement.

"Open carry advocates create a potentially very dangerous situation. When police are called to a 'man with a gun' call they typically are responding to a situation about which they have few details other than that one or more people are present at a location and are armed. Officers may have no idea that these people are simply 'exercising their rights.' Consequently, the law enforcement response is one of 'hypervigilant urgency' in order to protect the public from an armed threat. Should the gun carrying person fail to comply with a law enforcement instruction or move in a way that could be construed as threatening, the police are forced to respond in kind for their own protection. It’s well and good in hindsight to say the gun carrier was simply 'exercising their rights”' but the result could be deadly. Simply put, it is not recommended to openly carry firearms."

Not only could the result be deadly, but it could lead to law enforcement being called to many more scenes than necessary because it's not always clear who is carrying a gun with no intention of using it for anything other than self-defense and who is carrying a gun with the intent to harm. At worst, this lack of clarity could lead to an innocent citizen carrying simply to protect themselves being shot by a police officer.

According to the Law Center to Prevent Gun Violence, open carry laws are associated with higher suicide rates. Even after controlling for the effects of population density, poverty, age, education, and race, states with open carry laws have 23 percent more suicides and 36 percent more firearm suicides.

Psychology professor Michael Anestis told CNN: "A lot of people think [those who want to commit suicide] will just reach for whatever is there, but suicide is difficult, and when you make a difficult thing harder, it's that much less likely to happen." Anestis' study found that laws prohibiting open carry were correlated with 3.5 percent reductions in suicide rates in California and 1.7 percent reductions in Oklahoma only a year after the laws were passed.