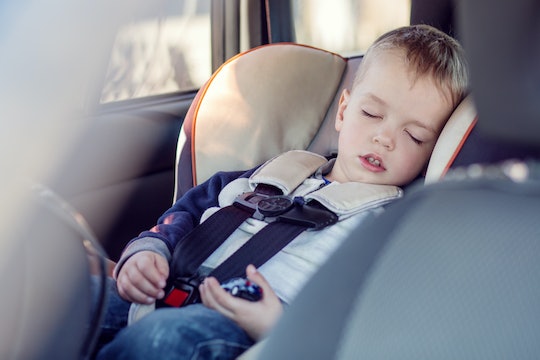 How To Avoid A Car Nap, According To Real Moms

The car nap — is there anything worse? I wish I could tell you it gets better, but my kids are 6 and 9 and still routinely fall asleep in the car. It's like a magical lulling agent that just sends them off into a gentle slumber. You'd think a car nap would be helpful, but when you go to move your kids — nope. Everyone tries their best to make the transfer, but knowing how to avoid a car nap can help you skip the inevitable unpleasantness you know is coming once you park.

My son didn't transfer from the car to his crib at all. As soon as I pulled him asleep from his car seat, he was up and at 'em. It was really frustrating that I felt as though I was imprisoned by his nap time. My schedule revolved around his naps, and there was very little I could do about it unless I could stay in the car for 90 minutes, or just accept the fact that my son would be a total crabby patty the rest of the day. He's always been a kid who relies on a good, solid sleep routine.

By the time my daughter came around, I couldn't do it anymore. I simply couldn't be bothered at that point. I had so much to do, and I needed a solution. While it didn't always work, I did find a few things that helped, and I asked other moms for their input as well on avoiding the car seat nap.

The first thing I learned was to not encourage sleep behavior — my daughter wasn't allowed to have her pacifier or her blankie while we were on car rides. If she had one or the other, she was out like a light. Yes, this did lead to some rather loud car trips, but those were followed by blissful, blissful silence when we got home. But what do other moms do?

Janine Maioriello, 34, tells Romper that she would play with the windows, raising and lowering them to entertain her kids as they started to nod off. The wind would perk them up and the motion would make them laugh.

Chris Koutsis, 30, says that they like to do sing-a-longs, telling Romper that not only did belting out some Hamilton with their kids keep them up, it also taught them history. (And perhaps a bit about removing corsets.)

Looking for something that requires less work on your part? Nicole Tenenbaum, 27, has a simple tip — she tells Romper that she would offer her children an ice cold beverage, usually water. "I give her a sippy cup filled with insanely cold water. It's cool enough to keep her awake, and it keeps her occupied."

I also did this, and it works well as soon as your kids are allowed water. I'd also be lying if I said I didn't use a particularly leaky sippy cup. If it falls upside down on them, that water is not warm — it will wake them up. (And that is totally worth the mess.)

But if you're not into dousing your child in ice water, Sylvia DeSantis, 28, has another suggestion. She tells Romper that she turns on Disney, and purposely sings the wrong lyrics just to rile up her Disney-loving child. "As soon as I sing 'Well Tamatoa hasn't always had a hand, he was a sad boy named Chad once,' she flips out and is instantly awake and full of piss and vinegar." (That's beautiful, baby.)

I'm now so going to do this, by the way. It will surely keep my daughter awake to hear me screw up the lyrics to Moana, which she loves like I love gin.

The number one tip I can give you is to find the temperature your child is most apt to fall asleep, and go for the complete opposite. My kids are snow babies and they love a chilly space. So I make my car really rather warm. Yes, they complain, but I'm perfectly comfortable in the heat, and they go to bed at night. I'm calling it a win.

But it's worth remembering that no matter what you try, if you're driving during your kid's nap time, a car nap isn't always avoidable. Maybe keep a book in the car so you can get in some reading while they sleep in the driveway? Or just assume bedtime's going to be earlier than usual.