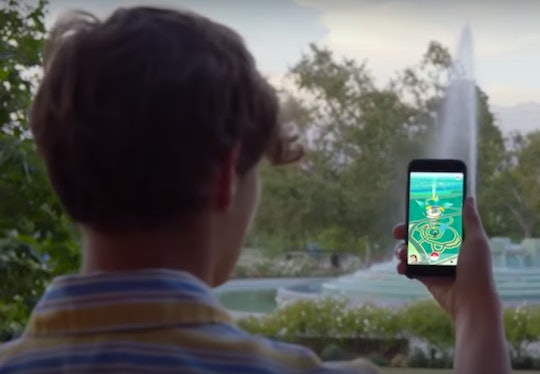 How To Battle On Pokemon GO, Because It's Different Than In Most Pokemon Games

Pokémon GO players spend their days jogging toward Jigglypuffs, bumping into Beedrills, and playing with Pikachu. The augmented-reality game allows each player to catch Pokémon in the real world using the camera on their cell phone. While part of the novelty of the experience is just spotting a Caterpie in the backyard, there are plenty of people out there who really want to be the very best. Wondering how to battle on Pokémon GO? Veteran trainers will recognize that battling Pokémon on mobile is a much different experience than in any of the traditional games.

In most Pokémon games, battles require quite a bit of strategy: players choose the Pokémon they want to use in the fight, then choose moves individually. But Pokémon GO battles don't require that level of engagement; according to Vox, all players need to do is "tap the screen" to attack and swipe to dodge. Though the outcomes of battles in most Pokémon games are determined by combat power already attached to a Pokémon, but Pokémon GO battles rely almost entirely on that metric.

Finding a battle is a bit different, too; there are no random invitations sent by in-game characters encountered while walking (which some players would say is a good thing). Gyms still exist, though, and they're where players find most of the action. First, a player needs to reach level 5, according to Forbes; then, they're able to battle in a gym. On the map, gyms are towering and silver; how a player engages with a gym depends on the team they're on. If a player's team controls the gym, that player can pick a Pokémon to fight with in order to defend the gym; if one increases a gym's standing, they'll have the option to drop off a Pokémon that will help the player earn a bonus every day. Tech Insider recommends starting one's Pokémon battling career at a gym controlled by their own team. The stakes are lower, but the battles allow players to level up Pokémon before entering rival gyms.

If the gym belongs to another team, the player can use six Pokémon to battle the players already in charge, Forbes reported. The player must defeat all rivals in order to claim the gym for their own team. But it's not always advisable to take on a gym. According to Kotaku, players may want to review the combat points attached to the Pokémon at the gym in order to determine if they have any Pokémon strong enough to successfully challenge them. If not, as Tech Insider reported, it may be best to visit a friendly gym first.

Pokémon GO is still a blast for the casual gamer, but players who master the basics of battling have a shot at ascending to virtual greatness.