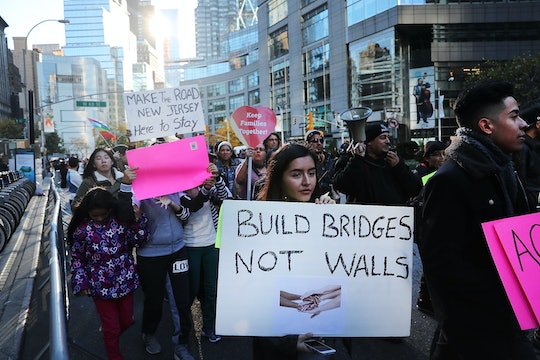 On Saturday, hundreds of thousands of women — and men — are anticipated to descend on the nation's capitol for the Women's March on Washington. Hundreds of sister marches are also planned in cities around the country for those who can't make it to D.C. With such a massive event spanning hundreds of cities, it's understandable there might be logistics issues. But what's been surprising to some is that the Women's March on Washington and its various sister marches are facing issues of inclusivity and intersectionality. With thousands of women from every different walk of life, here's what you need to know about how to be an ally of intersectional feminism at the Women's March — before you march.

Being an ally of intersectional feminism more than just some catchy idea: Feminism isn't defined solely by issues of gender inequality. So what is intersectional feminism? A term coined by legal scholar Kimberlé Crenshaw in 1989, intersectional feminism makes apparent the fluidity of a woman's experience with inequality and disparity across all parts of her identity, and how those parts of her identity can simultaneously influence the types of inequality she faces. The Women's March has faced criticism for a lack of representation of diverse experiences on the feminist continuum, particularly regarding race — so much so that the NAACP of Portland, Oregon, officially withdrew its endorsement of its city's Women's March.

We must create a society in which women, in particular women ― in particular Black women, Native women, poor women, immigrant women, Muslim women, and queer and trans women ― are free and able to care for and nurture their families, however they are formed, in safe and healthy environments free from structural impediments.

So what does that look like on the day of the Women's March itself? And how can you be an ally to intersectional feminism?

Intersectional feminism was borne out of the criticism that for a long time, the feminist movement largely represented white, middle class women and their experiences. Nearly 60 years later, this ain't your grandmother's second-wave feminist movement anymore — and some would argue that we're already well into fourth-wave feminism, in which intersectional feminism has risen more to the forefront thanks to the ubiquity of social media.

Intersectional feminist activism encompasses what it means to be a woman through all the overlapping layers of her identity and experience: Race, ethnicity, faith, sexual expression, socioeconomic status, and even citizenship — and so much more. Supporting your fellow woman means welcoming and giving her space to voice her unique experience and truly hear her. Intersectional feminism welcomes all women to the table and everyone gets a turn at the mic. Which leads to the next obvious step that all feminists and feminist allies should take...

Taylor Swift and her "let's make this about me" feminist clash with Nicki Minaj two years ago is a perfect example of why it's important to contextualize your own privilege. Being an ally means supporting others, not shoving your own experience on top of what someone else has experienced in the name of solidarity. Being an ally to intersectional feminism isn't just about listening to the diversity of experience faced by women from all walks of life, but validating those experiences as well.

No single experience with inequality, discrimination, or oppression trumps another. Intersectional feminism isn't about playing the Privilege Olympics and trying to parse out which group of women has it the worst. That said, it's vitally important that every feminist and feminist ally should take a moment to contextualize his or her own privilege, and how that might influence one's own personal understanding of other people's experiences. While you may have never had to tell your black child how they should and shouldn't interact with law enforcement doesn't mean that you can't empathize with, support, and most importantly validate the black mother who has.

Learn & Do The Work

When in doubt about being an ally to intersectional feminism: ask. Read. Learn. Bustle has a fantastic list of 12 books to keep your feminism intersectional. Whether you're hopping a bus to Washington or taking the train, make any one of these books part of your travel reading. And when you get to Washington, talk about what you've read and learned. Keep the dialogue going. Feminism doesn't exist in a bubble, so sharing what you've learned about the experiences of others is a key part of advancing the cause.

The most important of being an ally — no matter to what you're allied — is actually doing the work and not just proudly wearing an "ally" badge. Don't just talk the talk — walk the walk. The Women's March has the chance to be a beacon of intersectional feminism for all women — not just in this country, but in the world — and it's up to both those who walk and the allies who walk with us to champion women's rights as human rights.