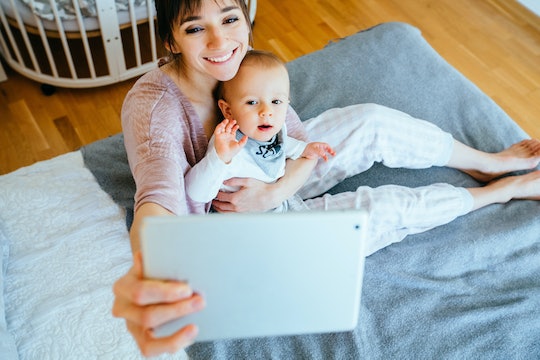 If you've ever wondered what life is like as an influencer, I can say that the welcome mat is rolled out, fancy canned wine comes free, and the breakfast pastries are teeny, exquisite marvels of engineering. But as I walked into Babypalooza NYC at New York's Chelsea Piers, what really hit me was the plurality of experience among the mom influencers gathered. "You don't need a feed of white people in white clothes doing white things to be attractive to a brand," Bustle Digital Group's director of strategic initiatives Margaret Wheeler Johnson told the crowd to murmurs of assent. They were there, ostensibly, to get the inside track on how to become a mom influencer, but the biggest takeaway was that your "influence" starts long before the #momlife posts start bringing you income.

It starts with who you are to begin with.

Mommy bloggers have been a fixture of our culture since the '00s, when mormon mom bloggers first entranced us with their picture perfect houses. Today, Instagram influencers get anywhere from $5,000 to $100,000 per sponsored post, according to Forbes, and YouTube partnerships can net as much as $300,000 for a spot. Industry site Mediakix estimates that companies will spend $1 billion on Instagram marketing this year. So for moms who are posting bump photos and dressing their toddlers in knit caps and linen onesies anyway, often as stay-at-home moms who halted busy careers, it makes sense to parlay their social presence into, well, a brand.

How to do that skillfully was the topic of the hour at the Armitron-sponsored "Find Your Voice" panel at Babypalooza NYC. As anyone who has ever taken a lazy scroll through Instagram knows, a bad ad placement can cause an immediate and involuntary grimace. The solution, say experts, is to avoid selling out — even as someone paid to endorse other brands.

"You are influencers in life before you become influencers online," CeCe Olisa, blogger and cofounder of The Curvy Con, says. "When you put your authentic voice out there, what you find is this group of parents' voices saying 'Me too!'"

The decision to tag a post with #blacklivesmatter drew immediate criticism from certain followers, Olisa recalls, but led to conversation, and to a major brand reaching out about a future collaboration.

Authenticity is fuel for a social media following, the panel agree.

There is an idea that there is not an appetite for having an opinion on anything but onesies — that your brain has left your body.

"Being authentic is the only way that I know," says Tiffany Ishiguro, an influencer who posts fashion fodder on Instagram under @tiffanish. Ishiguro, who is currently pregnant, explains that long-time followers understand that with growth comes changing opinions, changing circumstances. "A lot of my readers have been through my first baby and now my second." So they're fine with her brand allegiances shifting as her life evolves.

It's hard for influencers to dodge their readers on who they are for that reason. Their followers are with them through the ups and downs, and often respond most strongly to the posts that reveal a determined opinion.

Wheeler Johnson has seen that dynamic at work at Romper. "In the parenting space, particularly, there is an idea that there is not an appetite for having an opinion on anything but onesies — that your brain has left your body, that you're not guiding a person through a world that is burning around you." That thinking is totally misguided, she says.

"Every action that you take, being willing to tell people about the little imperfect pieces of your life, there is so much goodness comes from that." But, she says, it takes guts.

Lauren Wessler, New York regional director of Girls Leadership, believes that showing "the courage to be vulnerable, to show that you're imperfect, and to set limits" amounts to being a positive role model for your children. "We know girls want to be authentic in their lives, they just don't know how," she explains.

A willingness to be vulnerable, real, honest can bring with it criticism, as many moms who put their lives on the internet have found. But finding the right platform can help you contextualize the trickier parts of parenting.

"Some things... are better addressed on your blog, on YouTube, rather than in a tweet," says Ishiguro.

The overriding message was to be real. That the cleansed Instagrams of a few years ago won't hold interest the way a truly honest post will.

Wheeler Johnson leaves the crowd with one final piece of advice.

"Go on your Instagram, post a photo that is meaningful, and say the thing that you've maybe avoided saying."

More Like This
The “Tripledemic” Is Scary, But I Feel Less Helpless When I Wear A Mask
Festive Mommy & Me Holiday Nail Ideas To Try
101 Advent Calendar Activities, From Books To Read To Cookies To Bake
The Best Black Friday 2022 Deals For Moms