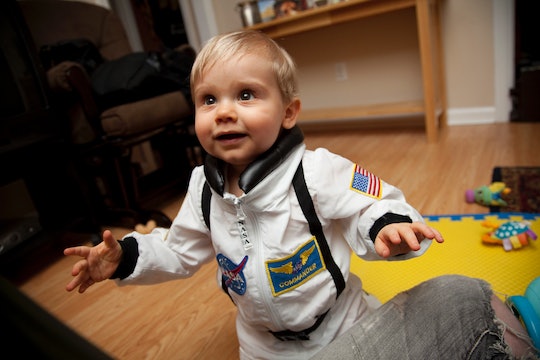 How To Become An Astronaut, Because Your Kid Will Ask At Some Point — VIDEO

You know how your kids seem to always come up with the best questions about things we kinda have no idea how to answer? And how they do this all the time? You know, like their inquiries about how music comes through radio speakers or how an airplane stays in the air. Basically, questions they are totally justified in asking, but ones that leave the typical parents stumped and fumbling over their umms and ers. Among all of their whys and hows, you will undoubtedly come across queries about what their adult lives might be like, including potential jobs.

This will start innocently enough — they want to be a firefighter or a dancer, because fancy trucks and fancy outfits — but it only gets more complicated and ambitious from there. After the days of wanting to be police officers and doctors, their professional aspirations will start to rise — literally. And with that, they may very well ask you a new question: how do you become an astronaut? And instead of telling them to just go to school and study hard, yadda yadda yadda, you can confidently show them exactly what NASA is looking for. Even if the competition is forever pretty stiff (after all, it pretty much is rocket science).

On paper, NASA's only educational requirement is a Bachelor's degree in something like physical science, biological science, engineering or mathematics. They also ask that your vision be super solid, and that you have some sort of prior experience in a related field. In other words, it's complicated, and not entirely simple to answer. Like, in order to become an astronaut you need to have had experience as an astronaut? The point is, thank god we have the Internet and its many, many useful videos to shed light on that which defies our ability to explain to our kids.

And it's important that if our kids are serious about space travel (man, it would be so awesome if they were), they understand the path ahead of them — because they won't be even nearly the only people on it. The last time NASA was hiring, they ended up hiring just eight candidates out of a pool of 6,400. I have to assume those numbers are only going to rise, since aside from the whole American hero thing, becoming a part of NASA is suddenly getting a lot more exciting: By 2025, they plan to send an astronaut to a freaking asteroid, and then in the 2030s, we have the famed Mars trip coming. Not since we landed on the moon has there been this much excitement over space travel and exploration.

But fielding your kid's question this time is about to be made so much simpler with these few useful qualifications of NASA astronauts.