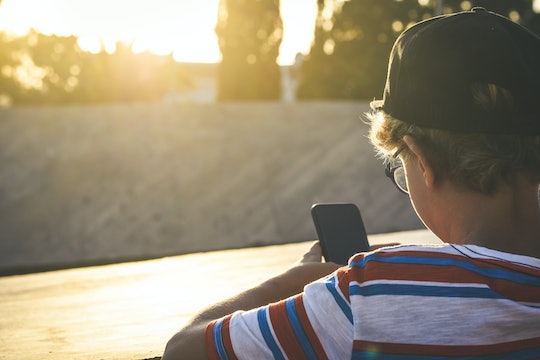 For many, Instagram is simply a place to connect with friends and family and share photos or short videos of the latest happenings in your life. And while most adult users don't find themselves victims of targeted harassment on the social media platform, Instagram can be a dark place for kids and teens who are being preyed upon by bullies. Of course, that's not what the social app wants to be, and in an effort to reduce bullying across its platform, Instagram has rolled out a new, expanded anti-bullying feature designed to help empower kids and teens against their bully. Here's how to combat bullies on Instagram using the platform's new feature.

While millennials once flocked to Facebook, teens today seem to prefer Instagram. In fact, a Pew Research Center survey found that 72 percent of teens in the United States used Instagram in 2018, making it the second most popular online platform for that age group after YouTube. But as The Atlantic has previously reported, Instagram "provides a uniquely powerful set of tools" for bullies. First, there's the ease with which users can create anonymous profiles to troll or bully other users. Then, there's the ability for users to leave mean comments directly on another user's photos and videos, send harassing direct messages, or post about them in their own feed and stories.

Up until now, Instagram's answer to such cyberbullying was its block feature. But Instagram head Adam Mosseri recently told NPR that conversations with teenagers on the app revealed they didn't find the platform's block feature to be an effective measure against bullying as it often made their face-to-face or in-person interactions with their bully worse. Part of the problem, according to NPR, was that although Instagram doesn't notify users that they've been blocked by someone, it's not difficult to figure out if you've been blocked as you're suddenly unable to find a specific user's profile, posts, or stories. Blocking another user also removed an individual's ability to see what that user may be continuing to post about them in their own feed or stories, effectively leaving you unable to respond to or report future abuse, NPR reported.

"Bullying is a complex issue, and we know that young people face a disproportionate amount of online bullying but are reluctant to report or block peers who bully them," Instagram wrote in a recent blog post announcing the feature. "Restrict is designed to empower you to quietly protect your account while still keeping an eye on a bully."

While Block prevents another user from being able to find your profile or see any of the content you've posted on Instagram, Restrict functions a tad more subtly. Once enabled, Restrict makes it so that comments left on your posts from the user in question are visible only to them, giving them the impression that they've been able to comment on your page. If you wanted to read the comment they left, simply tap "see comment" to reveal it to yourself. Instagram will then give you the opportunity to approve the comment so everyone can see it, delete it, or ignore it.

To activate Instagram's new Restrict feature, simply swipe left on a comment left by the user you'd like to restrict. You can also access the feature directly from the user's profile or via the Privacy tab in Settings. Restricted users can also be "unrestricted" at any time.

Although it's unclear how effective the Restrict feature will be in combating bullying on Instagram, it's at least a step in the right direction.