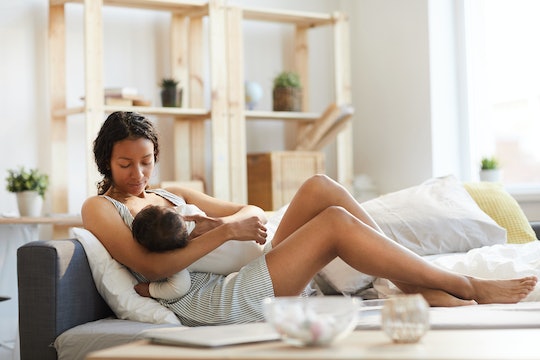 Here's How To Boost Prolactin After Giving Birth, According To Experts

If you've read anything about breastfeeding, you've probably read about the different proteins and hormones that work to manufacture breast milk. One of the most important factors in this production is the protein hormone, prolactin, and because of this, you'll want to know how to boost prolactin after giving birth.

Prolactin is a key protein hormone that's in charge of breast milk production and also contributes to breast development. During pregnancy and lactation, prolactin levels are elevated in order to maintain production and growth, according to the medical resource StatPearls. The nuts and bolts of breast milk production seem fairly boring on the surface, but they're actually rather fascinating. I contacted Dr. Jessica Madden, Medical Director at Aeroflow Breastpumps, and board-certified pediatrician and neonatologist to get a better sense of what's happening in the body and brain when you're producing milk, and if there is any way to make the body's production more efficient. She tells Romper that, simply put, "Prolactin is a hormone that is needed to make milk. Prolactin levels increase immediately after birth, and mothers' bodies continue to release prolactin in response to breastfeeding."

This responsive nature of prolactin production is what is so interesting. Much of what our body does is self-contained. Yes, we release hormones when we are scared or when we are in pain, but the production of prolactin is dependent upon pregnancy and the stimulation of a baby at the breast, making it uniquely externally motivated.

When I was breastfeeding, I thought of the whole process like how I thought about my lip balm addiction. The more I used it, the more I needed it, and the more I needed it, the more I used it. One depended upon the other entirely. When I finally weaned myself from thrice (or more) daily applications of mentholated lip balm, I found I didn't need it as much. That's actually remarkably similar to breastfeeding and also to eventually weaning. They're dependent upon one another. (All the early aughts teens know exactly the brand of lip balm in the dark blue tub that I'm talking about.)

Molly Petersen, certified lactation counselor (CLC) at Lansinoh, confirms the need for breast stimulation to maintain production, telling Romper, "The best way to boost your prolactin levels is feeding baby at the breast. Prolactin is responsible for milk production, and therefore the key triggers for producing it are the baby nursing and removing milk from the breast."

However, Madden tells Romper that pumping, not just having the baby suckling at the breast, can absolutely contribute to the production. "The best way to increase prolactin after birth is frequent breastfeeding and/or pumping for at least eight to 10 sessions per day in the first few weeks after birth." That sounds like a lot, but as a mom who has breastfed two babies, it definitely tracks. They are hungry little creatures.

Madden cautions that "levels of prolactin are highest at night, so it's especially important not to miss middle-of-the-night feedings in the weeks after birth," regardless of how tempting the sweet oblivion of sleep might be.

And there are other ways to boost prolactin, according to Madden. "There are some herbs and foods that may increase prolactin, such as fenugreek, oats, barley, papaya, dates, and apricots," but remember that "frequent breastfeeding is the key to maintaining optimal prolactin levels."

Towards the end of my breastfeeding journey with my daughter, she was so active that sitting down to nurse wasn't on her agenda. My supply dwindled to almost nothing. The only thing that worked for me was fenugreek supplementation, but what no one tells you about that is that you start to smell like that supplement. Your sweat smells like maple syrup. Basically, you're making milk, but smell like an IHOP. Alas, it was worth it. But perhaps I should have just held my daughter a little firmer so she wasn't so squiggly.