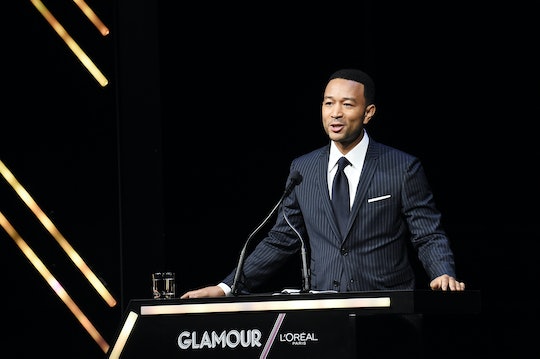 You Need These John Legend Christmas Songs, Like Yesterday

Who says it's too early to talk about Christmas? When John Legend puts out an album, you buy it. No questions asked. Period. It just so happens, the Jesus Christ Superstar released a holiday album in anticipation of the primetime broadcast of the special — and of the same name — A Legendary Christmas. If you want to know how to buy A Legendary Christmas album before it airs to put you in the holiday spirit, you've come to the right place.

The album, which released in October, features an impressive array of tracks. Some are classics like “The Christmas Song (Chestnuts Roasting on an Open Fire)," others are originals, and there are a few with special musical guests like Esperanza Spalding and Stevie Wonder on "What Christmas Means to Me." Yes, there's plenty of harmonica, and no, it's never going to get old. You can listen to two of the A Legendary Christmas tracks,"Have Yourself a Merry Little Christmas," and "Bring Me Love" now via Billboard. It really can't get any better, can it? It does. While the show itself will showcase Legend and wife, Chrissy Teigen's, friends, family, and other celebrity entertainers, the album feels like the perfect counterpart. Executive-produced by Raphael Saadiq, the 14-track album is the best nod to Christmas. Legend is supporting the album and special with a 25-date tour that began November 15 in Florida and will go all the way through December 20 in San Diego, California. It's really going to be a "Legendary" holiday, indeed.

It's hard to say who'll join Legend on tour but the special will have the likes of SNL's Kenan Thompson, Queer Eye's Fab Five (Antoni Porowski, Tan France, Karamo Brown, Bobby Berk and Jonathan Van Ness) — who talk to two-year-old Luna via video chat (awww), Meghan Trainor, Darren Criss, Jane Lynch, Zach Galifianakis, a Kardashian or two, and a slew of others caroling door-to-door in a Los Angeles neighborhood. The Wrap also just announced Neal Brennan, Yassir Lester, Sam Richardson and Tien Tran will join, as well as Awkwafina, Derek Hough and Ben Schwartz. So basically, it's the special of your dreams.

As if John isn't busy enough being an EGOT recipient, raising a family with Chrissy, and building an empire, he continues adding to his long list of credits. September marked an Emmy win for his role as the big man himself in Jesus Christ Superstar — making him the second-youngest person and first African-American man to do so, according to CNN. Talk about #Goals. On top of all that, he'll join The Voice as judge next season, alongside Kelly Clarkson, Blake Shelton, and Adam Levine (all of which will also appear on the televised special).

You can snag the album now through any number of available channels. Online stores might even have great deals through the post-Thanksgiving-into-Christmas season. To watch the special with John, Chrissy, and all their guests from the comfort of your living room, set the DVR for Nov. 28 at 10 p.m. ET on NBC. It'll air right after the epic Christmas in Rockefeller Center tree lighting. And BTW, John is performing on there, too, so you'll get a double dose of Legend magic. If you somehow miss this airing, there will be a repeat on December 12 at 10 p.m. ET. You pretty much have zero excuses not to involve A Legendary Christmas in your holiday plans on some level and honestly, would you want it any other way?