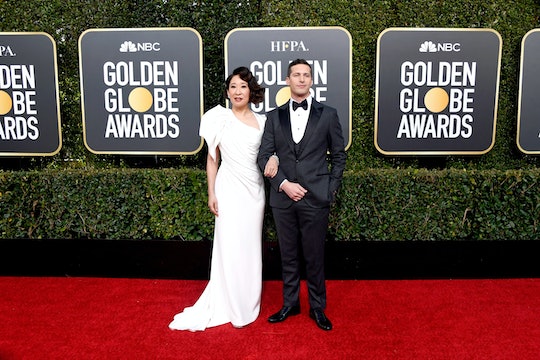 If you tuned into the Golden Globes red carpet on E!, then you might have spotted a few celebrities wearing a distinct white and black bracelet that read "Time's Up X2." If you wanted to show your support by acquiring one of your own, then you'll need to know how to buy a Time's Up bracelet.

There's an official Time's Up store where you can purchase as many bracelets as your heart desires. The ones being worn at the 2019 Golden Globes come in black or white, with lettering in the alternate color and a bright red "X2" added on. A single bracelet costs $5, and they are also available in packs of 10 or 20. It's one of many products available on the website; there are also pins, totes, t-shirts, and notebooks all emblazoned with the Time's Up message. You can even get a Time's Up water bottle!

Time's Up pins were big at the 2018 Golden Globes, though celebrities also wore black as a sign of solidarity. This year the dress code was looser and much more colorful, but celebs were still showing support. Adding the "X2" to the Time's Up bracelet seems to be making it clear that the movement has not been forgotten even though a year has passed since it exploded in the news.

On their website, the Time's Up organization states they insist on "safe, fair and dignified work for women of all kinds." That was especially important to keep in mind following the allegations of abuse in Hollywood that surfaced ahead of last year's Globes. On the anniversary of their Jan. 1, 2018 launch, Time's Up announced the shift to Time's Up X2, which was intended "to double the number of women in leadership and across other spaces where women are underrepresented."

All of the Time's Up merchandise was designed by Arianne Phillips, according to Refinery29. Phillips is a stylist and costume designer. In an interview with The Hollywood Reporter, she explained that she was invited to design the logo for last year's pins by Reese Witherspoon. Phillips went on to do so with the help of jewelry designer Michael Schmidt, just in time for the Globes. Now she's returned to craft the X2 bracelets, which she revealed on Instagram with the caption, "What a difference a year makes."

A few actors and actresses on the red carpet at the 2019 Globes spoke about how important spreading that message was to them. When asked about the significance of starring on The Handmaid's Tale, according to Entertainment Tonight, Yvonne Strahovski (who plays Serena Joy) said that the correlation between the real life movement and the show meant a lot to her. It was inspiring to see women "move forward into positions where they haven't been before." That was why she was wearing the X2 bracelet.

Any audience members who appreciated the bracelet and its sentiment can find it with ease on the Time's Up website. Not every item sports this year's X2 addition, but they all get the message across.