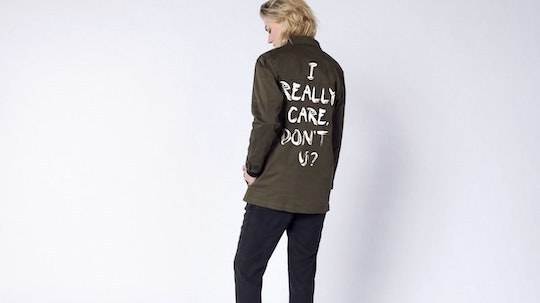 You Can Now Buy This 'I Really Care' Jacket, & It's More Than Just Wearable Activism

Between the horror of families being separated at the border to the death of unarmed black teenager Antwon Rose to POTUS being under investigation, the news has people pleading for nothing new and terrible to come to light. The only good thing that's come as a result? People are demanding change. Activists are organizing rallies, protestors have occupied major highways, and companies are creating products that speak to a bigger message, like Wildfang's "I Really Care" line. Oh, and about that: Are you curious about the "I Really Care" jacket and how to buy it? Good because it's kind of the only response to First Lady Melania Trump wearing a "I Really Don't Care, Do U?" jacket to a detention center in McAllen, Texas.

Tone-deaf? Purposeful? Cruel? All of the above? You be the judge.

That's right: On June 21, Melania stepped aboard Air Force One in an olive green Zara jacket emblazoned with the message written in white lettering on the back of the jacket. FLOTUS was spotted wearing the $39 jacket when she arrived at Andrews Air Force Base in Maryland to visit detained immigrant children.

People immediately took to Twitter to criticize the choice, writing things like, "This is not a joke. I am actually speechless." Another user wrote, "Why hasn't Hillary apologized for Melania's jacket?

But it was clothing brand Wildfang who responded with their own version of the jacket, one that had a noticeably different message: “I Really Care, Don’t U?”

In a matter of hours, the company sold out of the jacket and had raised $15,000, all of which will be donated to RAICES (Refugee and Immigrant Center for Education and Legal Services), a Texas-based nonprofit organization that provides free and low-cost legal services to underserved immigrant children, families, and refugees.

Once the jacket started to sell, the company announced on Twitter that it would design more products and set a new goal of raising $50,000 to donate to RAICES. The result was a t-shirt ($40), and black and olive green bomber jackets ($98), all with the "I Really Care" message.

Wildfang writes in the products' descriptions: "Hey Melania. WE REALLY DO CARE! That's why we made this tee. To say we stand with immigrants. To say WE CARE."

Make sure you take note: If you do order a jacket or t-shirt, then you won’t get it right away. But while Wildfang says the merchandise won't ship right away, RAICES will receive your donation ASAP. That means you can rest assured your money will get to the people who need it most in a timely manner.

If you want one of the pieces, then you might want to hop to it. If the popularity of the first jacket is any indication, then the bomber jackets and t-shirts are likely to sell out soon, too. Especially considering that even celebrities are keen on the "I Really Care" merchandise.

Author, stylist, and former What Not To Wear host Stacy London tweeted her support for Wildfang's pieces and even added a quip in reference to her role as host of WNTW: "Go get your @wearewildfang bomber here and let’s show @FLOTUS WHAT TO WEAR."

Melania has stayed mum on a response to the criticism over the jacket, but her spokesperson Stephanie Grisham downplayed the jacket with a tweet yesterday, saying: "Today’s visit w the children in Texas impacted @flotus greatly. If media would spend their time & energy on her actions & efforts to help kids - rather than speculate & focus on her wardrobe - we could get so much accomplished on behalf of children." She closed with the hashtags "#SheCares" and "#ItsJustAJacket."

The facts: Her jacket didn't exactly include a hidden message. Also important? This is the First Lady of the United States choosing to wear said jacket. Consider the team of people she has to run her dinner choices by, let alone what she wears and where she goes while wearing it.

I will leave you with this: Last week, I heard author Glennon Doyle — who is also the founder and president of Together Rising — speak in Virginia and she said of current events: "If you aren't rage-fully angry, then you better have just woken up from a Rip Van Winkle slumber. And then ... sit down, sister, I have some bad news for you."