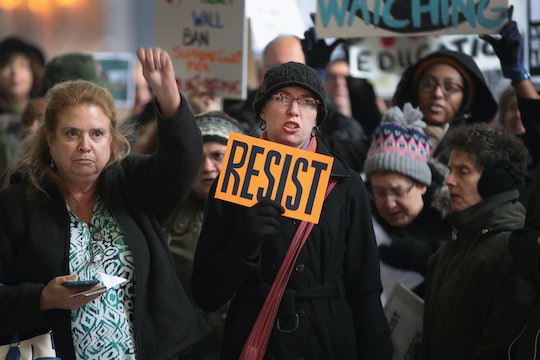 Call Your Rep & Senators About The Refugee Ban

Unless you've been living without internet access for past week, you've likely seen friends on social media telling you to get in touch with your state lawmakers and give them a piece of your mind (or heap praise upon them). But knowing just how to call your representative and senators about the refugee ban, or any other issue like a Cabinet nomination, is half the battle. It sounds like it will be complicated — doing anything within a bureaucracy, whether it's changing the registration of your car at the DMV or waiting in the social security office can be hard sometimes. But calling the offices of your representative or senator is actually the easiest and most effective way to go.

Your legislators likely have offices in your state's capitol and in Washington D.C., so first you have to figure out which one you want to call. Go with both. You can find the contact info for your rep here then go look up your senators here. (If you don't know who your representative or senators are, don't be embarrassed. You can look up your representative here and there's a drop down menu on the senate contact info page above to see who's responsible for you.) You can also just call 202-224-3121 and ask the Capitol's operator to put you through. Up to you.

Once you call, an administrator answers the phone and you tell them what you want to say. You can't just go on a rant about everything you're upset about. To really get the attention of a rep or senator, you want to make it super clear what issue you're calling about and why you oppose/love it. This way, tallying up the calls is easier. The admin will likely ask you if you want a response, which is always an option. In these crazy times though, it's better to say you don't. That way, they can just add you to the list and move on.

If you need help, you can say this, which is adapted from the Indivisible Guide:

Obviously, replace "x" for your and their name. The person on the other end of the line might ask you questions or tell you that your rep and senator have already "made a statement," about the ban or any other issue. You should then say, "that's great, but I need them to know that they need to actively oppose/vote against it," and then reiterate your concern. If they say that the lawmaker plans on doing whatever the heck they please, ensure them that you will call back tomorrow. And then do that.

And although you're fired up and might want to start calling everyone, representatives and senators (mainly representatives) really only care about people that live in their district or state. So stay local and focused.

Many senators and representatives have said that constituent calls to their offices were the main reasons they decided to vote no on, for example, the confirmation of Betsy DeVos to head up the Department of Education. So calls do work. And they're much more effective than tweeting or sending an email, since it takes a human to answer the phones and occupies the whole office. You can always post on Facebook or email later, but calling is the way to go.

It seems like such a silly thing, but if you want to make sure your voice is heard, pick up the phone and call about the refugee ban. And then call back every day until something changes.