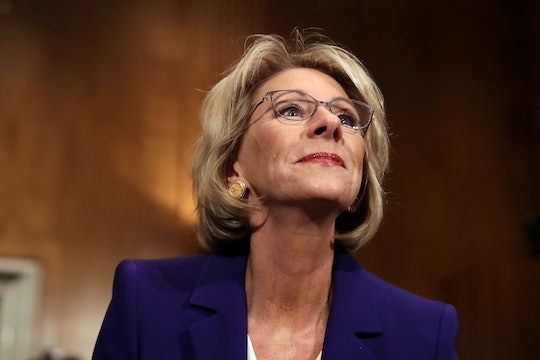 How To Call Your Senator About House Bill 610

With so much attention focused on President Trump's possible ties to Russia, his updated executive order travel ban, and the House healthcare law replacement bill, there are plenty of other concerning actions making their way out of Trump's Administration. One such action that's flown under the radar is the introduction of a House bill that would fundamentally change American public schools by establishing a nationwide school voucher system. Here's why and how to call your senator about House Bill 610, the first Betsy DeVos education bill.

Even before becoming education secretary, Michigan billionaire DeVos has been a proponent of school choice, despite having never worked in education as either an educator or administrator. H.R. 610, introduced by Iowa Rep. Steve King, aligns with just about every school choice talking point she's ever made on public record.

But the bill has lot more going on than just vouchers: It would also repeal nutritional standards for the national school lunch and breakfast programs. This seems like some really great legislating, because why should kids who need breakfast or lunch provided for them have access to healthy foods — they should just be lucky to get anything at all — am I right? (Obvious sarcasm is obvious.)

So far, H.R. 610 co-sponsors are few: besides King, only Arizona Rep. Trent Franks, Maryland Rep. Andy Harris, and Texas Rep. Pete Olsen have co-sponsored the bill — and let's hope it either stays that way, or that these co-sponsors can be persuaded to withdraw their support.

While the bill has so far only been introduced in the House, a Senate version must also take shape — and pass through both houses of Congress — before it can ever get to the president's desk. That's what makes calling your senator about H.R. 610 so important: Without a Senate companion bill, H.R. 610 won't ever see the light of day.

To call your two senators, you can look up who they are on the Senate website, along with all of their contact information, both for their D.C. and local offices. Expect D.C. phone lines to be busy and voice mailboxes full — Congress can't keep up with outraged constituents right now — so set aside a few extra minutes to try ringing each of their local offices, too.

No time to look up phone numbers? No problem. Call the congressional switchboard at 202-225-3121, tell them your state and they'll connect you to one of your senators. When you're finished speaking to the first senator, call back and asked to be connected to the other.

Now for the most important part: Your talking points. When calling your senators, tell them that you not only oppose the repeal of the Elementary and Secondary Education Act of 1965 as outlined in H.R. 610's "Choices in Education Act of 2017," but that you believe the national school lunch and breakfast programs should meet basic nutritional standards. See if you can get a firm commitment from your senators that they will oppose such legislation if it comes to the Senate. If they won't commit or just flat out say no, tell them you'll be calling back every day until they change their mind — and follow through on that promise, too.

Bottom line: H.R. 610 is a pretty awful piece of legislation that could have ruinous consequences for America's school children — and it's up to the public to contact their legislators in order to prevent this bill from ever becoming law.