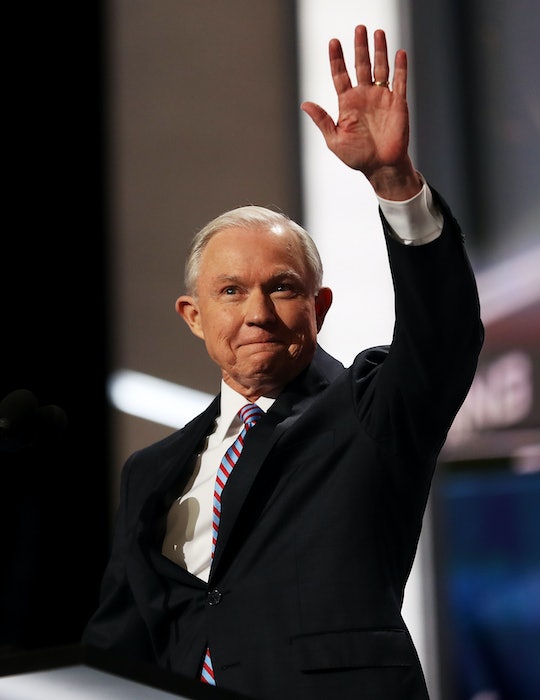 On Friday morning, President-elect Donald Trump announced that he would be appointing Jeff Sessions to his Cabinet, where the junior senator of Alabama would fill the role of attorney general. While the news isn't entirely surprising — Sessions endorsed and aided Trump repeatedly throughout his campaign — the announcement has sounded alarm bells for many people across the United States. If you're worried about the news, remember: the government is meant to represent the will of the people, and there are steps you can take to make your voice heard. A good first step? Call your senator about Jeff Sessions' appointment to attorney general.

For those less familiar with Sessions, here's a brief primer on the man who could become a top member of Trump's Cabinet. Sessions, who has been Alabama's junior senator for 20 years now, has taken a strong stance against immigration — both legal and undocumented — for years, and in 1986, accusations of racism kept Sessions from a federal judgeship. "Mr. Sessions is a throwback to a shameful era, which I know both black and white Americans thought was in our past," the late Sen. Edward Kennedy said during Sessions' confirmation hearing that kept him from the position. After hearing several accusations of racism, the majority of senators voted against Session's appointment to a judgeship. Sessions' office hasn't responded to Romper's request for comment regarding those allegations.

Additionally, in 2005, Sessions opposed a bill meant to ban the inhumane treatment of detainees, according to CNN, arguing that it was unnecessary, and just last year, he said climate change wasn't worrisome. "Carbon pollution is CO2, and that’s really not a pollutant," he said, according to The Washington Post. "That’s a plant food, and it doesn’t harm anybody except that it might include temperature increases."

Those worried about Sessions' past behavior can call their senators to protest Session's appointment to attorney general. Luckily, presidents require Senate approval for the appointment of attorney general (and many other executive positions), and citizens can call their senators to weigh in on the decision. To do so, find your senator's phone number at this link and give their office a call. Give them your name, address, and tell them you're a constituent of the senator's area. Then you can say something along the lines of:

I'm calling to ask [Senator's name] to block Jeff Sessions from the position of attorney general.

You can outline why you believe Sessions is unsuited for the role, and explain your reasoning. Senators are meant to represent and defend their constituents' desires in the Senate, and in fact, being re-elected to their post depends on it. With enough pressure, senators will need to acknowledge constituents' opposition to Sessions and vote against him. So if you're concerned about Sessions becoming the United States' next attorney general, find your senator's phone number, ring their office, and then inform your friends that they have a say, too.