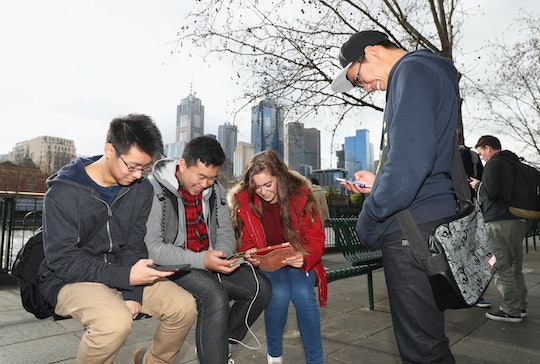 "Pokemon Go" is everywhere. More than likely, your coworkers have been playing it around the office and your mom has probably texted you wondering what Pokemon is. While some are wondering if the '90s have returned, others (like myself) are diving head first into this phone app where you can collect Pokemon — just like you did as a child. And if you're one of those out there are wondering how to catch a Zubat on "Pokemon Go" — you should be in luck. According to some, Zubat are super common.

According to the game, there are 151 Pokemon to catch. Among these include some of the more famous and recognizable Pokemon — like Pikachu and Snorlax. But users of the game have been noticing that some Pokemon are more common. One of these Pokemon include Zubat — a flying bat character that is very present in the game. But if people out there are looking for instructions on where to catch Zubats — they might be out of luck. According to polygon.com, the whole point of catching the different Pokemon is to go out and find them. Therefore, if you're expecting a Zubat to pop up at work or in front of your TV, you might have to go out and look for it instead.

Due to their wings and tendency to move around, Zubat can also be particularly hard to catch since they can't seem to stand still. According to pcmag.com, in order to catch the trickier Pokemon, hold your finger down on the pokeball until a green circle appears around the Zubat. That is when you can release your finger and try to capture the Zubat with the pokeball. However, it might take a few tries and some good aim due to their movement.

According to one Game Stop contributor, Zubat are super easy to find in some places that its frustrating to not find any other Pokemon. A simple search on Twitter will show you that they're popping up everywhere — more specifically in sporting arenas. The Charlotte Hornets, Detroit Tigers, and Sacramento Kings have all tweeted images of Zubats in their stadiums. So if you're going to any major sporting event, you might fight a Zubat sitting right in front of you.

Specific types of Pokemon also tend to show up based on location. Therefore, rock-type Pokemon show up in drier, rockier climates whereas water-type Pokemon favor the coast. So Zubats might be more common in your area due to how present bats are in nature there.

While Zubats might take a little more precision and aim in catching, don't be discouraged. From Twitter's consensus, Zubats are more common than most Pokemon and will come around again, even if you can't capture them the first time.