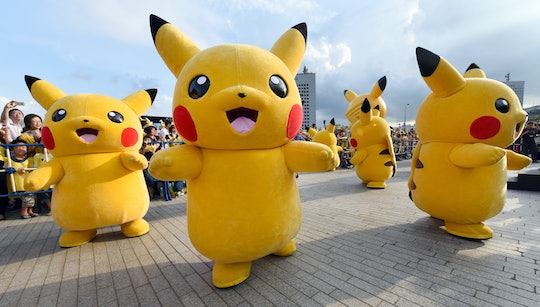 How To Catch Pokémon On Pokémon Go, Because It’s More Than Just A Game

Like so many nostalgic, '90s treasures, Pokémon is making a big comeback. The video game has been laying pretty low until now. The company just released a new iteration of the Poké-verse, Pokémon Go, and it's everything the Poké-obsessed have been hoping for. If you're new to the party, don't worry; anyone can join the search. Here's how to catch Pokémon on Pokémon Go, because it's more than just a game now.

To be honest, it is a game. But, it's more. You follow? Pokémon Go is a free app for Android and iOS that is taking the world by storm. It's what people are calling "augmented reality" because it uses your actual location to place you in the game, surrounded by Pokémon. According to Vox, Pokémon Go uses your geo-location and phone clock to make Pokémon appear, seemingly at random, around you. As you move about your daily life, you'll be able to discover more and more Pokémon, some in the most unlikely of places.

A lot of the appeal of Pokémon Go is that it is free and very straightforward. The object is just, as they say, to catch 'em all. Here are the basics:

According to IGN, tracking Pokémon is much more effective than just stumbling upon them. In the app, there's a "nearby Pokémon list." If a Pokémon is moving up the list, you're getting closer. Keep an eye on the app to sniff them out.

There are ways to get Pokémon to come to you. The Incense Item draws them in pretty well, according to IGN, but the Lure Module is even better. Place either item at a PokéStop and wait for the Pokémon to come running...hopefully.

No matter how good you are at luring or tracking Pokémon, you can't catch them without Pokéballs. According to Forbes, you can collect these at any blue Pokéstops, so keep your eyes out for them. There are many, many Pokéstops throughout the world, so there's bound to be one near you. Once you've stocked up there, you're ready to go. If you see a Pokémon near you, tap it on your screen to get started. You'll then be able to flip a Pokéball upwards — it takes some practice gauging how fast and far they need to go — to hit your target.

But, if you don't get it on the first shot, don't beat yourself up. Some Pokémon are easy to catch, others are very challenging and will take many tries and many Pokéballs. According to Kotaku, each little target will be encircled with a color that denotes its difficulty. Green is easy, orange is intermediate, and red means, yowza-this-is-hard. Wait until the ring is at its smallest, then strike! Once you've progressed in the game and leveled up a bit, catching Pokémon will become much easier. But, until then, good luck.